34 Q&As to Study the Respiratory System

1. What is the difference between respiration in the sense of gas exchange and cellular respiration?

Respiration in the sense of gas exchange is the process by which an organism absorbs the gases necessary for its cellular metabolism from the environment and expels the gases that are the products of this metabolism. Cellular respiration (aerobic or anaerobic) is the chemical reaction in which organic molecules are broken down to produce ATP molecules, the main energy source for the metabolism. 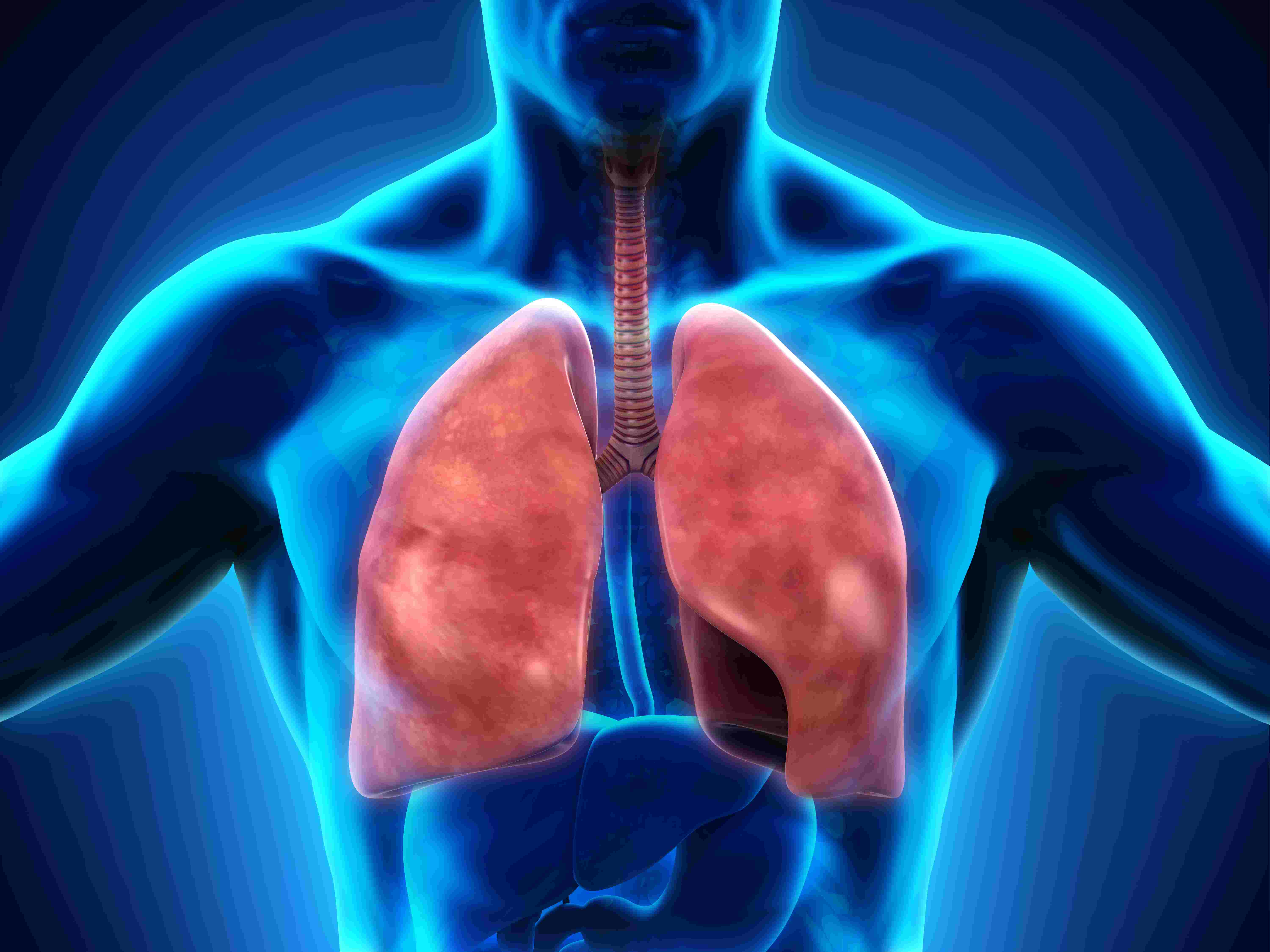 2. What is the chemical equation for aerobic cellular respiration?

The chemical equation for aerobic cellular respiration is the following:

Keeping in mind the chemical equation for aerobic cellular respiration, we can observe that glucose and molecular oxygen are needed as reagents and carbon dioxide and water are released. The process also consumes ADP nolecules and phosphate, turning them into ATP.

4. What are the different types of gas exchange that occur in animals?

5. Oxygen comes from the environment and, in the end, carbon dioxide returns to the environment. How do small animals solve the problem of having these molecules enter and exit their cells? Why isn't that solution possible for larger animals?

Small animals whose tissues make direct contact with or which are very close to the environment, such as cnidarians and poriferans, carry out gas exchange by diffusion.

Larger animals, whose cells are not in direct contact with the environment or are far from it, need special gas transportation systems. In these animals, respiratory and circulatory systems play this role.

6. Organisms from four phyla of the animal kingdom “breath” (carry out gas exchange) by diffusion. Which phyla are those? How is this type of respiration associated with features present in those animals?

The phyla of the animal kingdom whose organisms carry out gas exchange by diffusion are poriferans, cnidarians, platyhelminthes (flatworms) and nematodes (roundworms). This type of respiration is possible in these organisms because their tissues and cells are relatively close to their exterior.

7. Which animals use tracheal respiration? Does a blood-like fluid participate in this process?

Insects and arachnids are the arthropods animals that use tracheal respiration. Along the surface of the body these animals, there are many holes called spiracles, which are connected to small tubules called tracheae, through which air penetrates and carbon dioxide is expelled. The tracheae branch off into tracheoles, which reach all the tissues of the animal.

In the circulatory system of insects, blood only transports nutrients; gases are transported separately by the tracheal system.

9. Which animals use cutaneous respiration?

The thin skin and the need to live in moist environments are typical features of these animals.

10. What are branchiae? What are examples of animals that “breathe” through branchiae?

Branchiae, also known as gills, are small portions of highly-vascularized tissues inside or outside the body which are in direct contact with the surrounding water. Gills are the organs  that carry out gas exchange in aquatic annelids, crustaceans, fish and amphibian larvae (e.g., tadpoles).

11. What is the difference between gills and lungs?

Gills and lungs are both highly-vascularized organs that are used for gas exchange between the environment and the circulatory system.

Lungs are different from gills in that they are saclike structures that are always inside the body and are specialized in gas exchange in terrestrial environments. Branchiae, on the other hand, are internal or external laminar structures in direct contact with water, which are specialized in gas exchange in aquatic environments.

12. In addition to vertebrates, two invertebrate phyla contain species that use pulmonary respiration. Which phyla are these?

Terrestrial molluscs and arachnid arthropods are invertebrates that present pulmonary-like respiration. Some terrestrial molluscs have a mantle cavity filled with air that is in contact with highly-vascularized tissues that function as rudimentary lungs. In addition to their tracheal respiration, some arachnids have book lungs (thin folds resembling the pages of a book), which carry out gas exchange.

13. What are the three types of respiration in which the circulatory system transports gases?

The circulatory system plays an important role in cutaneous respiration, branchial respiration and pulmonary respiration. The respiratory function of blood is that of the transportation of gases for their exchange between tissues and respiratory surfaces in contact with the exterior (skin, gills, lungs).

Respiratory pigments are molecules present in the blood that bind to oxygen to transport it to tissues.

The organs that form the human respiratory system can be divided into three groups: the lungs, the airway and the respiratory muscles.

The lungs are made up of right and the left lungs, which are composed of alveoli where gas exchange (the entrance of oxygen and exit of carbon dioxide) takes place. The lungs are covered by the pleura (a serous membrane). The airway is made up of the nose, the pharynx, the larynx (including the vocal cords), the trachea, the bronchi and the bronchioles. The muscles on which the breathing process depends are mainly the diaphragm and the intercostal muscles (the muscles between the ribs).

17. How does the body defend itself from microorganisms and other harmful substances that enter the airway during the breathing process?

The epithelium of the airway is a ciliated epithelium and contains mucus-secreting specialized cells. The secreted mucus covers the internal wall of the airway, retaining organisms and foreign particles that then are swept away by the cilia of the epithelium.

In the ciliated mucosal epithelium of the airway, there is also intense immune activity, with antibodies and leukocytes inactivating and destroying foreign agents.

Other defense mechanisms of the airway are the sneeze and the cough. They help eliminate solid and semifluid particles such as pathological residues (sputum) and accidentally inhaled objects.

18. Which respiratory muscles are present in mammals?

In mammals, the muscles that participate in the breathing process are the diaphragm and the intercostal muscles. In respiratory insufficiency, other muscles can help in respiration, such as the muscles of the shoulders, neck, thorax and abdomen.

19. How are inhalation and exhalation carried out?

The diaphragm (exclusive to mammals) and the intercostal muscles can contract or relax, changing the volume of the thorax (the compartment where the lungs are located). The changes in the thorax volume force inhalation or exhalation.

20. What is the difference between arterial and venous blood?

Hematosis is the oxygenation of the blood. Venous blood (oxygen-poor) is transformed into arterial blood (oxygen-rich) through hematosis.

In humans, hematosis takes place in the lungs.

23. What is the gas exchange unit of the lungs of  mammals?

The gas exchange units of the lungs of mammals are alveoli.

24. What is the physical process through which gas exchange is carried out in pulmonary alveoli?

Gas exchange (the entry of oxygen and exit of carbon dioxide) in pulmonary alveoli occurs via simple diffusion in favor of the partial pressure gradient.

Respiratory Regulation and the Acid-Base Balance

25. What structure of the central nervous system regulates pulmonary respiration?

Pulmonary respiration is controlled by the neural respiratory center located within the medulla (the lower part of the brain next to the spinal cord).

26. What is the chemical equation for the formation of bicarbonate from carbon dioxide and water? What enzyme catalyzes this reaction?

The chemical equation for the chemical equilibrium of the formation of bicarbonate from the reagents carbon dioxide and water is as follows:

The reaction is catalyzed by the enzyme carbonic anhydrase, which is present in red blood cells.

An increase in the formation of the product of the chemical equilibrium of the formation of bicarbonate from carbon dioxide and water increases the concentration of hydrogen ions and therefore lowers the pH of the solution.

28. What are the consequences of shifting the chemical equilibrium of the formation of bicarbonate from carbon dioxide and water towards the consumption of products of the reverse reaction?

The shifting of the chemical equilibrium of the formation of bicarbonate from carbon dioxide and water into the reverse reaction (the production of water and carbon dioxide) means the consumption of hydrogen ions and therefore increases the pH of the solution.

The pulmonary ventilation frequency (number of inhalations per time unit) rises or lowers the carbon dioxide concentration in blood. If it is intense, more gas is eliminated to the exterior and, if it is reduced, the gas is retained inside the body.

30. What are acidosis and alkalosis?

31. How does the breathing process correct acidosis?

32. How does the breathing process correct alkalosis?

If the body undergoes alkalosis, the respiratory center located in the medulla receives this information and lowers respiratory frequency. The reduction in respiratory frequency makes the body retain more carbon dioxide and shift the equilibrium of the formation of bicarbonate towards the production of more hydrogen ions. thus lowering the pH of the blood.

Respiratory acidosis is when blood pH is low due to the increased retention of carbon dioxide caused by the lowering of respiratory frequency or by pulmonary diseases that inhibit gas exchange. Therefore, the cause of respiratory acidosis is pulmonary respiration. Metabolic acidosis is when blood pH is low not due to the pulmonary retention of carbon dioxide but due to metabolic disturbances. Some metabolic disturbances result in the release into the blood of nonvolatile acids that release hydrogen ions, lowering the pH of the blood (e.g., diabetic ketoacidosis).

Respiratory alkalosis is when the pH of the blood is high due to the increased exhaling of carbon dioxide caused by an elevated respiratory frequency. Metabolic alkalosis is caused by metabolic disturbances that increase the concentration of bases (alkalis) in the blood.

34. Where are the chemoreceptors that detect the acidity of the blood and trigger respiratory compensation located?

The chemoreceptors that participate in ventilation control are structures that collect information about the acidity and alkalinity of the blood. The information is then transmitted by nervous fibers to the respiratory center located within the medulla. The center then commands the respiratory muscles to compensate for the abnormal pH.

Now that you have finished studying Respiratory System, these are your options: