1. How do cells obtain the energy they need to function?

Cells obtain energy for their metabolic reactions from breaking down organic molecules with a high energy content. This energy is mostly stored as ATP molecules.

The process of obtaining energy in order to produce ATP molecules is called cellular respiration. 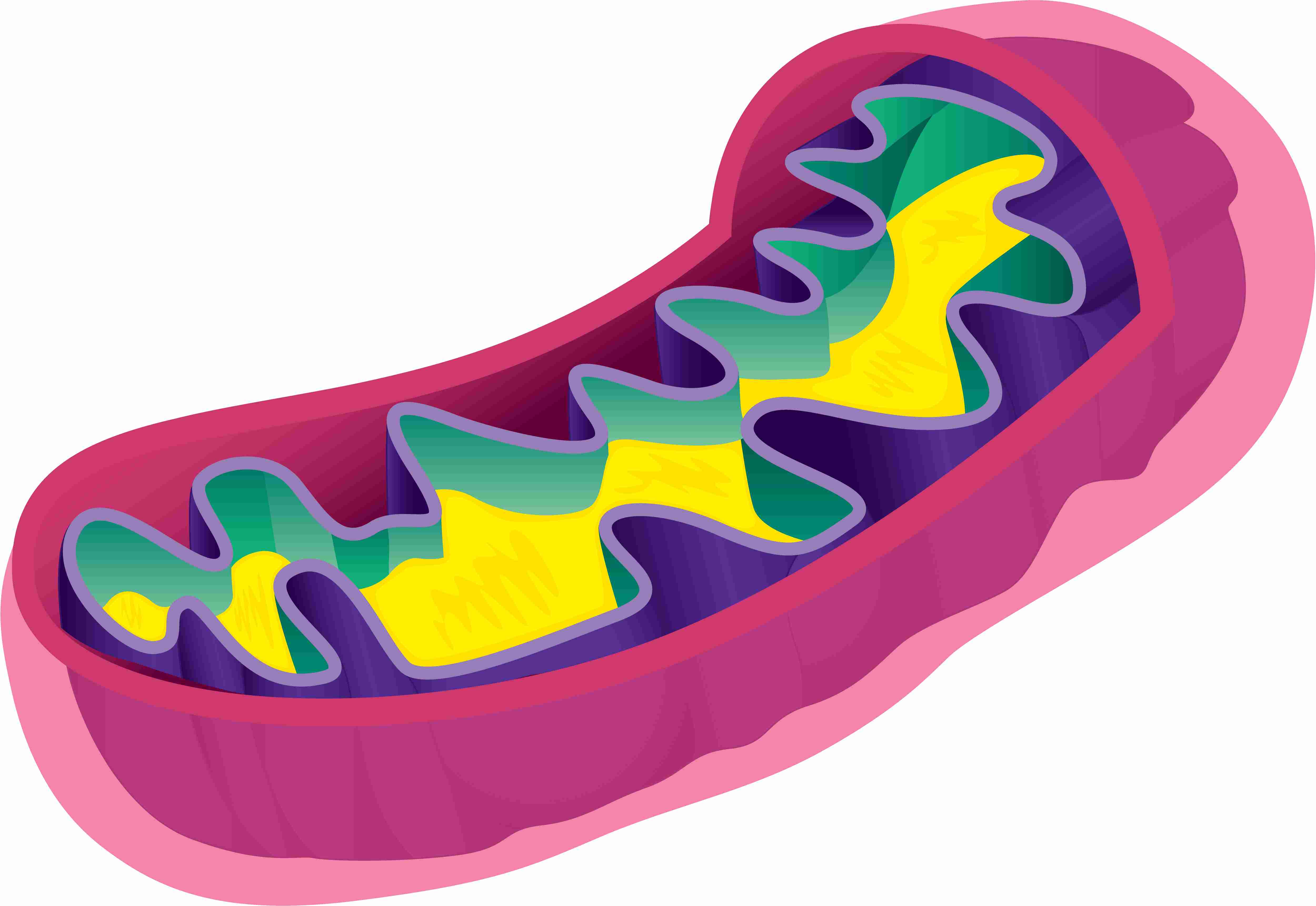 2. What compound is phosphorylated for ATP formation? What is the resulting compound when ATP releases energy?

ATP, or adenosine triphosphate, is formed after the binding of one phosphate molecule (phosphorylation) to one ADP (adenosine diphosphate) molecule. This is a process that stores energy in the produced ATP molecule.

When ATP provides energy to the cellular metabolism, it releases one of its phosphate ions and ADP reappears.

ADP can also release more phosphate ions and generate AMP (adenosine monophosphate) or even non-phosphorylated adenosine. Adenosine production from ATP is used in tissues that need an urgent supply oxygen, such as in the heart during a myocardial infarction (heart attack). This is because adenosine creates a local vasodilator effect, thus providing faster vasodilation than other physiological methods.

3. What are the types of cell respiration?

4. Under which conditions do aerobic cells use fermentation?

Some cells that usually obtain energy from aerobic cellular respiration can use fermentation when oxygen is not available.

There are bacteria and fungi that, in the absence of oxygen, use their anaerobic metabolic capability for energy supply. Muscle cells also use fermentation when oxygen is scarce.

5. What is the difference between aerobic and anaerobic organisms?

6. What is the difference between facultative anaerobes and obligate anaerobes?

Facultative anaerobes, like the fungi Saccharomyces cerevisiae, a brewing yeast, can survive in oxygen-poor environments by using fermentation. However, when oxygen is available, these organisms use aerobic respiration.

8. In general, what are the reagents and products of fermentation?

In fermentation, glucose (sugar) is broken down into pyruvic acid (each glucose molecule forms two pyruvic acid molecules). In this process, two molecules of ATP are produced.

10. What substance causes the acidic flavor of fermented milk?

Some bacteria ferment milk lactose via lactic fermentation, producing lactic acid. This product is responsible for the acidic flavor of yogurt, curds and milk.

11. How can knowledge pf fermentation explain the origin of muscle cramps and pains after intense physical exercise?

A typical fermentation process due to oxygen scarcity happens in muscle tissue. Under intense use, muscles require too much energy (ATP) and consume much more oxygen to produce that energy. High consumption leads to oxygen scarcity and the muscle cells begin to use lactic fermentation to satisfy their energy needs. In this situation, muscle pain, cramps and fatigue are due to the lactic acid released by fermentation.

13. What cell organelle is specialized in aerobic respiration?

The cell organelles specialized in aerobic respiration are the mitochondria.

14. What are the main components of the mitochondrion structure?

Mitochondria are organelles enclosed by two lipid membranes. The inner membrane invaginates to the interior of the organelle, forming cristae and delimiting an internal space known as the mitochondrial matrix.

15. What are the three phases of cell respiration?

The three phases of aerobic cell respiration are glycolysis, the Krebs cycle and the respiratory chain (also known as the electron transport chain).

16. What is glycolysis? What are the products of this process?

Glycolysis, the first stage of aerobic cell respiration, is a process in which glucose is broken down to form two pyruvic acid molecules along with the formation of two ATP and two NADH molecules.

17. Does glycolysis occur within the mitochondria?

Glycolysis happens in the cytosol and not within the mitochondria. Pyruvic acid molecules later enter the mitochondria to participate in the next phase of aerobic cell respiration.

18. How many ATP molecules are made after glycolysis?

Glycolysis is a process similar to the breaking down of glucose in fermentation. It produces (a final balance of) two molecules of ATP for each glucose broken down.

19. What is NAD? What is the role of the NAD molecule in glycolysis?

NAD (nicotinamide adenine dinucleotide) is a hydrogen acceptor and necessary reductant (to receive hydrogen) in some reactions, in which it is reduced and converted into NADH₂. During glycolysis, two NAD molecules gain hydrogen ions released after an intermediate reaction, thus forming NADH₂.

20. What happens to the pyruvic acid molecules made by glycolysis during aerobic respiration? What is the sequence of reactions that follows?

The pyruvic acid molecules made in the cytosol via glycolysis enter the mitochondria.

Within the mitochondria, each pyruvic acid molecule is converted into one molecule of acetyl-CoA (acetyl coenzyme A), releasing one carbon dioxide molecule. The Krebs Cycle (also known as the citric acid cycle), the second stage of aerobic respiration, then begins.

21. What is the official name of pyruvic acid?

Pyruvic acid is 2-oxopropanoic acid. Therefore, it is composed of three linearly bound carbon atoms with one extremity forming the organic acid function (COOH) and the middle carbon atom binding to an oxygen atom by double bond.

22. Why can it be said that each glucose molecule moves the Krebs cycle twice?

23. Why is the Krebs cycle also called the final common pathway of the breaking down of organic compounds?

The Krebs cycle is called the final common pathway of the breaking down of organic compounds because it is also possible to generate acetyl CoA from the breaking down of lipids and proteins. Since acetyl CoA is the substrate that triggers the Krebs cycle, this process is called the final common pathway because it is activated by other organic molecules (lipids and proteins) and not only by glucose.

The body uses its energy reserves of fat and protein to cycle the Krebs cycle when experiencing malnutrition or when there is no glucose available for the cells.

24. What are the final energy products of each round of the Krebs cycle? Where is the majority of the useful energy found at the end of Krebs cycle?

After each round of the Krebs cycle, two carbon dioxide molecules, eight protons (hydrogen ions) captured by NAD and FAD (also a hydrogen acceptor) and one ATP molecule are produced.

During the Krebs cycle, acetyl CoA is broken down. At the end, the useful energy is incorporated into hydrogen atoms transported by FADH₂ and NADH₂ molecules.

Each round of the Krebs cycle releases two carbon dioxide molecules.

All of the six carbons atoms of the glucose molecule are then incorporated into six carbon dioxide molecules (two made during acetyl CoA formation and four during the two cycles of the Krebs cycle).

26. Where in the mitochondria does the process called the respiratory chain occur? Which products of the Krebs cycle are used in that final phase of aerobic respiration?

The respiratory chain, or the electron transport chain, is performed by protein systems located in the inner membrane of the mitochondria. Energized electrons of hydrogen atoms transported by NADH₂ and FADH₂ are the products of the preceding phases which are used in the respiratory chain.

Cytochromes are proteins of the internal mitochondrial membrane that are specialized in electron transfer and which participate in the respiratory chain. Energized electrons released by the hydrogen donors NADH₂ and FADH₂ (then reconverted into NAD and FAD) pass through a sequence of cytochromes, losing energy each time. The energy is then used in the synthesis of ATP.

28. During what part of the respiratory chain do electrons from FADH₂ and NADH₂ passing through cytochromes release energy for ATP synthesis? What is this ATP synthesis called?

FADH₂ and NADH₂ are oxidized into FAD and NAD and release hydrogen ions and highly energized electrons at the beginning of the respiratory chain.

Hydrogen released in the mitochondrion then bonds with oxygen to form water. As a reaction that depends on oxygen, this type of ATP synthesis is called oxidative phosphorylation.

29. Until the Krebs cycle, aerobic respiration can be described without mentioning oxygen, the chemical element after which the reaction gets its name. In which part of the process does this chemical element take part? What is its importance?

Oxygen is involved in aerobic respiration in its final phase, the respiratory chain. It is of fundamental importance because it is responsible for the maintenance of the hydrogen concentration gradient between the spaces separated by the inner mitochondrial membrane. This gradient promotes the functioning of ATP synthetase and therefore the phosphorylation of ADP to form ATP. In the space inside the inner membrane, oxygen binds to free hydrogens atoms to form water. This hydrogen consumption maintains the hydrogen gradient and the traffic of protons through the ATP synthetase.

30. What is the effect of the poison cyanide on aerobic respiration?

Cyanide is a poison that inhibits the last cytochrome of the respiratory chain, interrupting ATP formation and thus causing the cell to die.

Anoxia is a situation in which there is no available oxygen in the cell. Without oxygen, the respiratory chain stops, there is no ATP production, the cell does not obtain energy and it dies.

The Efficiency of Aerobic Respiration

32. How many ATP molecules are produced after in aerobic respiration and what is the net energy gain of the process?

33. What is the general equation for aerobic respiration (also representing ADP and phosphate)?

The general equation for aerobic respiration is:

34. Why can the consumption of molecular oxygen indicate the metabolic rate of aerobic organisms?

The consumption of molecular oxygen (O₂) has a direct relationship with metabolic rate of aerobic cells and therefore the metabolic rate of organisms. Cells with a greater metabolic activity require more energy and this energy comes from ATP molecules. As ATP production is required, the intensity of aerobic cell respiration is also higher and more oxygen is consumed.

Now that you have finished studying Cell Respiration, these are your options: