Pollution is the contamination of an ecosystem by factors that are harmful for the equilibrium of its biotic or abiotic components. 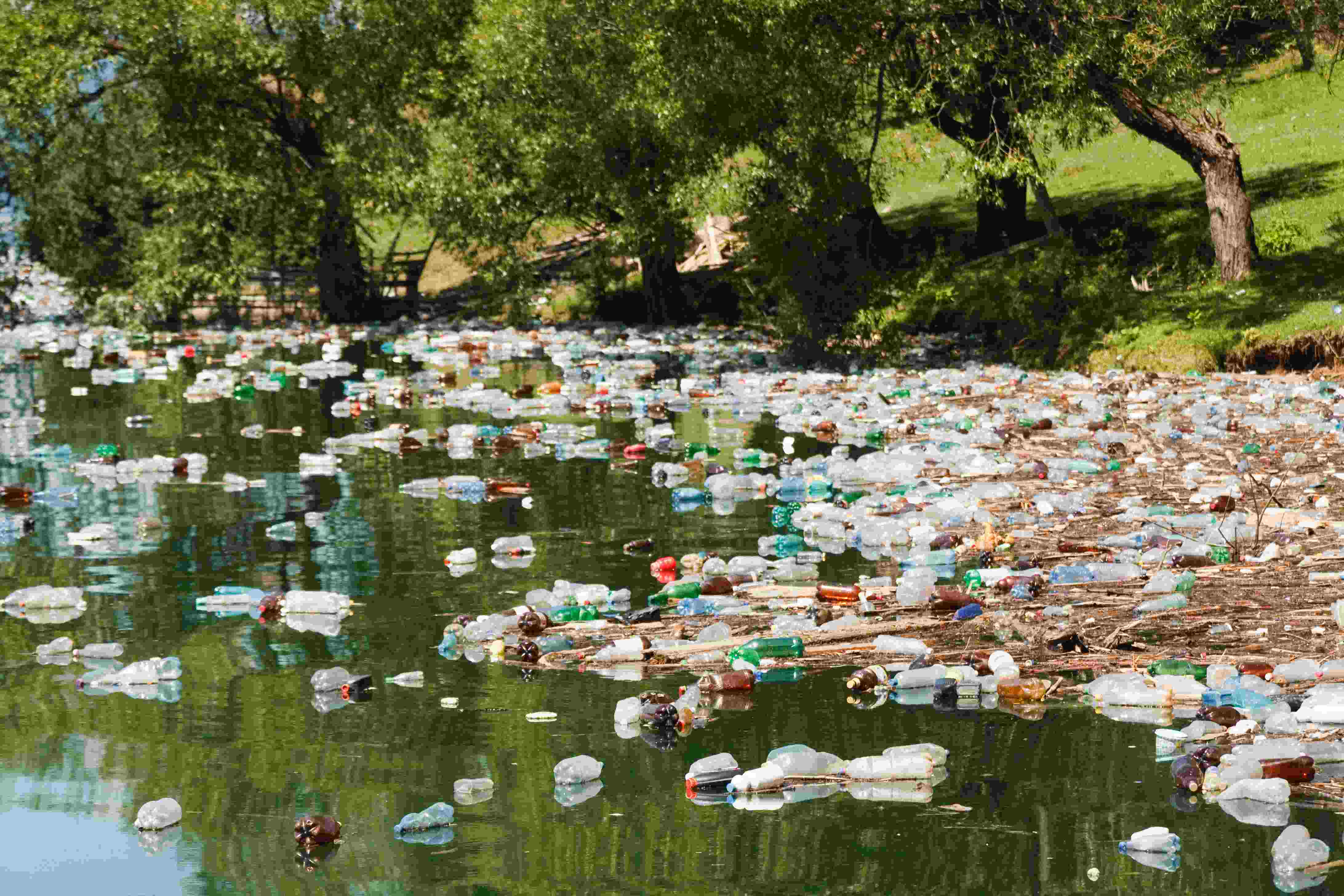 2. Is pollution always caused by humans?

In most cases, pollution is caused by human activity. However, other species and some abiotic factors can also pollute an ecosystem. For example, the red tide is created by a proliferation of some algae and volcanic dust is a consequence of the internal activity of the planet.

4. What are the main types of waste?

Organic waste is more easily reabsorbed by nature, but the speed and the geographical concentration of its production due to urbanization cause the pollution of rivers and lakes as well as the proliferation of disease vectors and the environmental degradation of towns. Recyclable waste is composed of waste materials that can be reprocessed and used again by humans, such as plastics and metals. The problem with recyclable waste is that the separation of such materials is not culturally widespread and there is not enough social organization to use them. As a result, recyclable waste is mixed with other wastes, increasing the volume of landfills even more. Non-recyclable waste is formed of waste materials that technology cannot yet recycle, such as ceramics, photographic paper, mirrors, cigarettes, plasticized papers, etc. In thes future, this kind of waste may become recyclable waste and should be separated. Toxic waste includes industrial chemical residues that are harmful to life and the environment, such as contaminated medical waste and domestic waste containing insecticides and medicines. Toxic waste is a major environmental problem, since it puts the life of humans and other living organisms in danger. Nuclear toxic waste is made of materials that release invisible dangerous radiation for many years. Nuclear toxic waste is produced through the extraction of nuclear minerals (such as uranium), by nuclear reactors and nuclear power plants, in hospitals where nuclear medicine is performed and in research centers. Although nuclear waste is often stored in armored receptacles, the risk of accidents is permanent. Space waste is the waste produced by the activity of humans in space starting in the second half of the 20th century. It consists of non--operating satellites, rocket pieces and other equipment that remain orbiting the earth or other celestial bodies, or even travelling across space.

5. What is selective waste collection?

Recyclable waste is waste that can be reprocessed and used again. Waste recycling depends on the separation of recyclable materials from non-recyclable ones and on the classification of the recyclables into plastics, metal, paper, etc. The function of selective waste collection is to simplify that separation by sorting the waste at the point of origin. Selective collection also helps the creation of environmental awareness among the people that produce the waste.

6. What is the cost-benefit relationship regarding sewage treatment as a strategy to fight water pollution?

It is much cheaper for society to treat sewage. Non-treated sewage pollutes rivers, lakes and the sea, and is a cause of water-borne diseases. For society, the cost of these diseases is much higher than the cost of sewage treatment.

One of the most economical systems to treat sewage is the aerobic treatment system, which consists of reservoirs maintained very oxygenated so that aerobic bacteria can decompose the organic material.

Eutrophication is the process of the excessive increase in nutrients, such as phosphate and nitrate, in water due to the direct depositing of non-treated sewage. The nutrients act as fertilizers, leading to an abnormal proliferation of aquatic algae. With the exaggerated growth of the alga population, the number of aerobic bacteria that decompose organic materials also increases. The proliferation of these bacteria depletes the oxygen dissolved in the water, killing fish and other animals. In addition, the lack of oxygen causes the decomposition to be carried out by anaerobic bacteria. Anaerobes multiply and release hydrogen sulfide, which makes water unfit for other living organisms and creates a putrid smell.

8. What is a biodigester?

A biodigester is a piece of equipment that produces carbon dioxide, hydrogen sulfide and fuel gases (biogases) such as methane from organic materials in decomposition (dung, food waste, sugar cane waste, etc.). The biogas is used in heating, as energy for motors and machines and even has industrial uses. Biodigesters are widely used in public landfills and in rural areas. In addition to producing biogas, the organic waste can be turned into high-quality fertilizer.

Mercury is a metal that when present in the water of rivers, lakes and seas contaminates fish, crustaceans, molluscs and other living organisms. The mercury accumulates along the food chain and, in each following trophic level, the amount of the metal within the individuals is higher. When humans eat contaminated animals, they also become contaminated and severe nervous system injuries may result from it. The main sources of mercury pollution are gold mining and the use of substances derived from it in industry and agriculture.

10. Besides mercury, which other heavy metals cause toxic pollution?

Examples of other heavy metals that cause toxic pollution are lead, cadmium and chromium.

11. What are persistent organic pollutants (POPs)?

POPs, or persistent organic pollutants, are toxic substances formed from organic compounds. POPs are produced in several industrial processes, such as the production of PVC, paper whitened by chlorine, herbicides, insecticides and fungicides, as well as in the incineration of waste. Examples of POPs are dioxins, furanes, chlordane, DDT, dieldrin, heptachlor, toxaphene and hexachlorobenzene.

POPs are toxic and highly harmful since, like the heavy metals, they are bioaccumulative, meaning that they are not broken down by the body and accumulate even more in each following trophic level of the food chain. In humans, POPs can cause cancer and nervous, immune and reproductive disorders.

12. Is the upward movement of warm air good or bad for the dissipation of pollutants?

The upward movement of warm air is a natural method of dispersing pollutants. The air near the ground is hotter because the sun heats the soil and the soil heats the air nearby. Since it is less dense, the warm air tends to move towards higher and colder strata of the atmosphere. Such movement helps to disperse pollutants.

13. Does thermal inversion occur in the winter or in the summer?

A low altitude thermal inversion occurs in the winter. During this period of the year, the sun heats the soil less and the natural upward movement of warm air decreases. Therefore, the pollutants form a low layer between the cold air layer near the ground and another layer of warmer air above them. The pollutant layer over industrial areas or big urban concentrations reduces the penetration of the sun's energy and the air bellow takes an even longer time to warm up.

Thermal inversion confines a layer of pollutants at low altitude, which otherwise would have been dispersed by the natural upward movement of warm air. The solid particles present in the atmosphere cause health problems, such as the exacerbation of asthma and other pulmonary diseases, coughing, respiratory unease and eye discharges. Over time, pollution can also trigger the appearance of cardiovascular and neoplastic diseases.

15. What is the role of the ozone layer for living organisms?

16. What are the main chemical compounds that destroy the ozone layer?

Chlorofluorocarbons react with ozone in the upper atmosphere, releasing molecular oxygen and therefore reducing  the amount of ozone in the atmosphere.

Another substance that destroys the ozone layer is methyl bromide, used in agricultural insecticides.

17. What is nuclear pollution?

Nuclear pollution consists of radiation emitted from atomic nuclei. This radiation is highly harmful to living organisms. It can be caused by the extraction of radioactive minerals, nuclear reactors, nuclear research centers, hospitals and medical centers that use radioisotopes, nuclear bomb explosions or accidents in the transportation, handling or storage of nuclear materials. Nuclear materials remain dangerous for many years, contaminating the environment with radiation that can cause cancer, immune impairment, congenital deficiencies, burns and even death. The damage is proportional to the intensity of the exposure to the radiation.

Its persistent nature and high level of damage make nuclear pollution one of the major environmental problems of our time.

18. What is plutonium reprocessing? Why is it a big environmental issue?

19. What is genetically-modified food?

20. Why are GMOs considered a threat to the environmental safety?

GMOs can be dangerous to the entire biosphere since the transfer of genes between species may have immediate and long term unpredictable consequences. The creation of a new species by nature is a slow process, dependent on causal mutations and natural selection, and is a relatively safe process for the ecological equilibrium. It is impossible to know how the fast and artificial introduction of genetically-modified organisms into nature affects ecosystems. Pathogenic agents may be involuntarily created in laboratories, spreading unknown diseases; genetically-modified species may uncontrollably proliferate, destroying ecological interactions that have taken thousands of years to be established; and the ingestion of genetically-modified food also has unpredictable effects.

21. What is biological control?

Biological control is a natural method to control the size of animal, microorganism or plant populations. Biological control is based on the knowledge of inharmonious (negative) ecological interactions between species. Using such knowledge, a parasite, competitor or predator species is introduced into an ecosystem in order to attain a reduction in the population of another species with which it has an inharmonious ecological interaction. Biological control presents the advantage of substituting the use of pesticides and other toxic chemical products in the control of plagues and diseases. However, it should be employed with caution and with serious prior study to avoid a harmful ecological disequilibrium.

A type of biological control of some species can be carried out by the introduction of previously sterilized males that do not generate offspring.

Bioremediation is used, for example, in the decontamination of environments polluted by oil spills. In this process, bacteria that use hydrocarbons as a substrate for their cellular respiration are used.

23. What is global warming?

Global warming is the increase in the temperature of the planet due to the accumulation of certain gases in the atmosphere, especially gases that retain the solar energy reflected by the planet's surface. The main gas that causes global warming is carbon dioxide, CO₂, although other gases also act as “warming gases”, such as methane, CH₄, and nitrous oxide, N₂O. The exaggerated increase of carbon dioxide in the atmosphere has been caused by the burning of fossil fuels (mainly oil and coal) in industrial and urban societies and by forest fires. (It is important to note that the natural warming provided by gases in the atmosphere is fundamental for the maintenance of the planet's temperature.)

Predictions of studies sponsored by the United Nations state that global warming may cause life-threatening transformations to the planet in the near future. However, countries that are the biggest emitters of carbon dioxide, such as the United States and China, systematically ignore the warnings and continue to greatly contribute to the danger.

Global warming is one of the most polemic environmental issues today.

Now that you have finished studying Environmental Issues, these are your options: