The Characteristics and Functions of Epithelial Tissue

1. What is the function of human skin?

The skin is the external covering of the body. In humans, its main functions are protection, the perception of information from the environment, the control of body temperature and the secretion of substances. 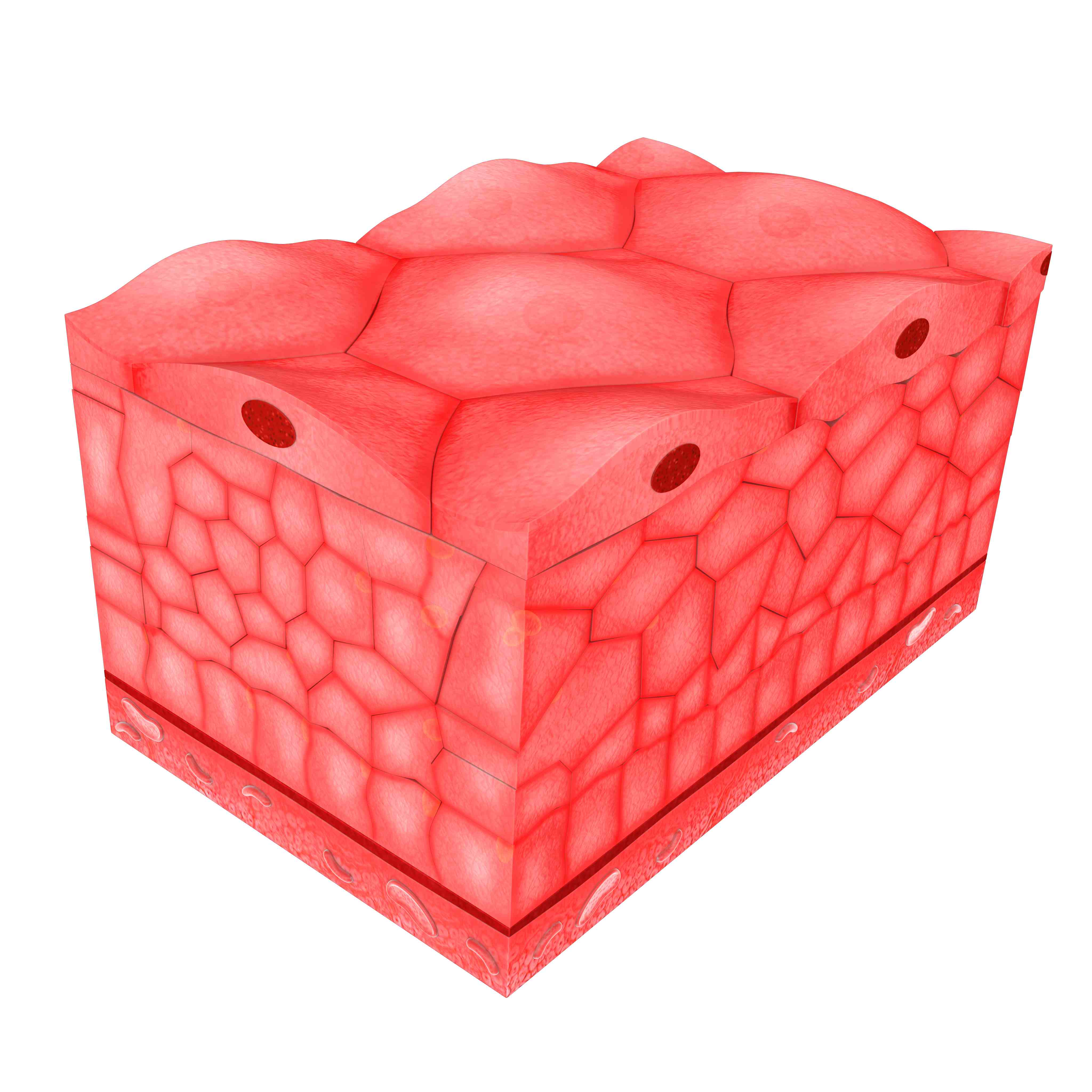 2. What tissues form the skin in vertebrates?

Skin annexes exist in some phyla and classes, such as hair, sweat glands and sebaceous glands.

3. Besides the skin, what are the other coverings within the body?

Besides the skin, there are other covering tissues made of epithelium over other tissue layers. They are the tissues that cover the internal surfaces of hollow organs, such as the organs of the digestive tract, the airway, the renal tubules, the ureters, the bladder, the urethra and the blood vessels. Glands and serous membranes are also made of epithelial tissue.

4. What are some functions of epithelium?

Epithelial tissues can be used as a covering, for impermeability and for protection against the environment. For example, in the amphibian skin,  it may be used for gas exchange, whereas in the guts and renal tubules, this tissue may be used for reabsorption. Furthermore, it may play the role of thermoregulation, carrying out tasks such as sweating, and secretion of substances, like in the epithelium of glands. In some animals, the skin also plays the important role of camouflage and mimicry .

5. What is the typical feature of epithelium? How different is it from connective tissue?

The typical feature of epithelium is the absence or almost absence of space between cells. Epithelial cells are compactly positioned side-by-side with the help of structures specialized in cell adhesion, such as desmosomes and interdigitations. This feature is related to the fact that these tissues are generally exposed to an exterior environment and, as a result, need more resistance and impermeability against the entrance of foreign materials into the body.

Connective tissue has the opposite features, due to its filling function. It contains a large amount of interstitial material (the matrix) and has a relatively large space between cells.

Cell Adhesion and the Vascularization of Epithelia

6. What specialized structures help in the adhesion between cells?

7. Is epithelium vascularized? How do nutrients and oxygen reach epithelium? Why is this feature an important evolutionary acquisition?

Epithelium is not vascularized (capillaries do not directly reach its cells). It exchanges substances by diffusion with the connective tissue located under it.

Since epithelium is not vascularized, the tiny skin injuries or scratches that happen all the time do not cause bleeding and do not expose the blood to contamination from foreign agents. This is an important protective strategy of evolution.

8. How are epithelial tissues classified?

Epithelial tissue is classified according to the shape of the cells that form it (epithelial cells may be cuboidal, columnar, or squamous) and according to the number of layers in which those cells are placed in the tissue (simple or stratified).

9. How different is simple cuboidal epithelium from columnar epithelium? Where are these epithelia found in the human body?

Simple cuboidal epithelium can be found, for example, in renal tubules and in the walls of thyroid follicles. The simple columnar variety is the epithelium that internally covers the intestines, the stomach and the gallbladder, for example.

11. What is the function of keratin in the epidermis?

The epidermis is the outer layer of the skin made of epithelial tissue. The epidermis contains keratin-secreting cells (keratinocytes). Keratin is an insoluble protein contained in the surface of the skin, which provides protection and impermeability. In mammals, keratin also forms hair.

The keratinized cells of the surface of the skin form the corneal layer. These cells die and are continuously replaced by others.

12. How different is the epidermis of fish from that of amphibians?

The epidermis of fish is very thin and contains mucus-secreting cells. Fish skin does not contain keratin. The mucus has a protective function and also helps the animal move under water. (Fish scales originate from the dermis and not from the epidermis.)

Amphibians present a slight keratinization of the skin, probably an additional adaptation to the terrestrial environment. Amphibians have a smooth and wet epidermis without scales. These features facilitate their cutaneous respiration.

13. Which glands are present in the epidermis of mammals, birds and reptiles?

In the epidermis of birds and reptiles, there are practically no glands. Mammals have sweat glands and sebaceous glands.

Melanocytes are epithelial cells of the skin specialized in the secretion of melanin. Melanin is a pigment that, in addition to coloring the skin, the iris of the eye and the hair, also works as a filter against the ultraviolet radiation of the sun, thus protecting the body against the harmful effects of this radiation (mainly burns and carcinogenic mutations).

Melanocytes are the cells affected in one of the more deadly skin cancers: melanoma.

Now that you have finished studying Epithelial Tissue and Skin, these are your options: