How Energy from the Sun Spreads to Life on Earth

The Energy Sources of Food

1. What is the primary energy source of life on earth?

The primary energy source of life on earth is the sun. The sun plays the important role of keeping the planet warm and is the source of the light energy used in photosynthesis. This energy is converted into organic material by the photosynthetic autotrophic organisms and consumed by other living organisms. 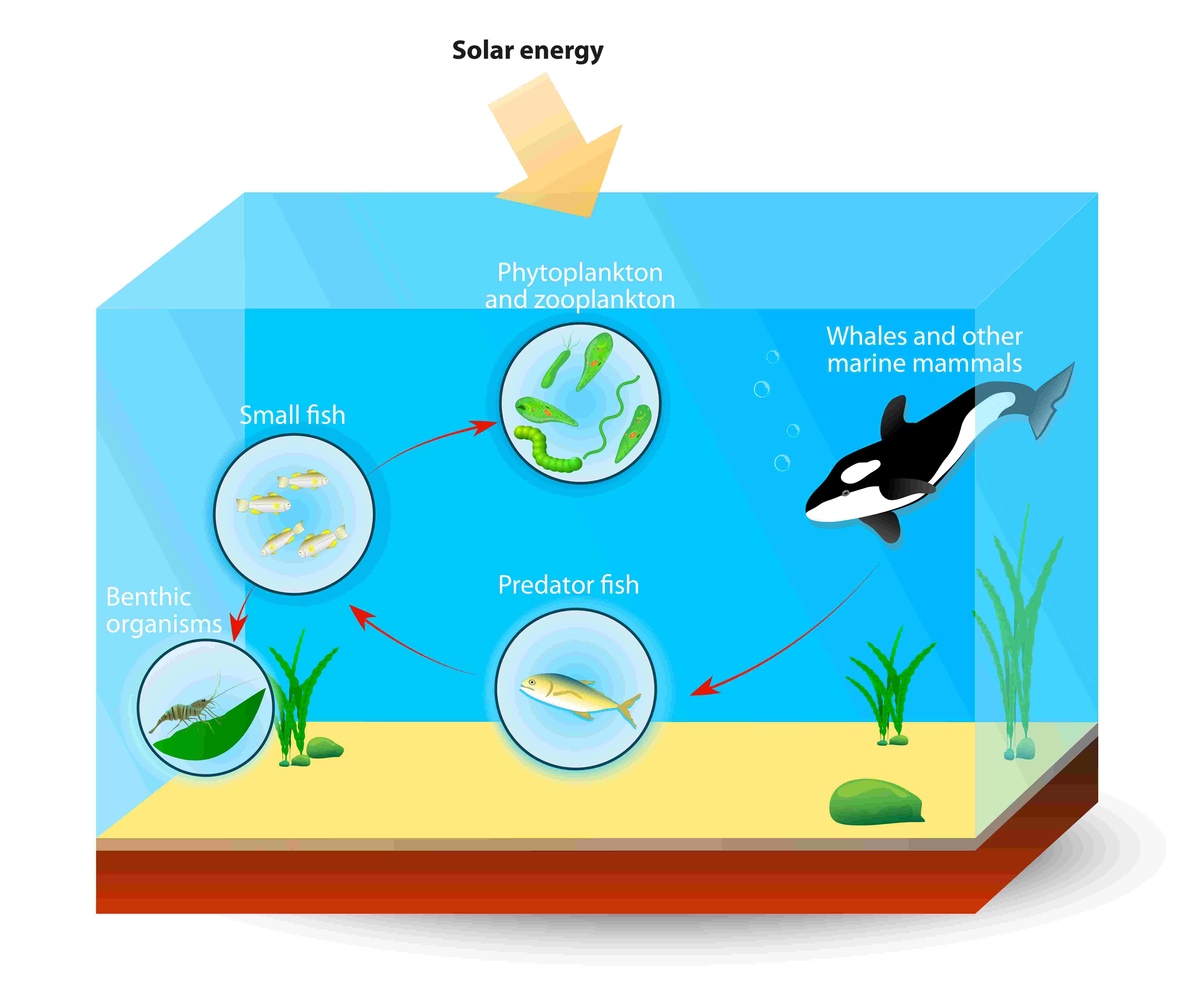 2. What is the main means by which autotrophic organisms obtain energy?

The main means by which autotrophs obtain energy is photosynthesis. (There are also chemosynthetic autotrophs.)

3. Which autotrophic group is responsible for the production of the majority of the molecular oxygen on earth?

Algae and cyanobacteria of phytoplankton are the largest contributors to the production of molecular oxygen.

Types of Organisms of a Food Chain

4. In the ecological study of food interactions, what are autotrophic organisms called?

In ecology, autotrophic organisms are called producers because they synthesize the organic material consumed by the other living organisms of an ecosystem.

An ecosystem cannot exist without producers.

5. How are heterotrophic organisms divided in the ecological study of food interactions?

A food chain is the linear (not branched) sequence in which a living organism serves as food for another, starting with the producers and going up to the decomposers.

7. How is energy transferred along a food chain?

The energy flow along a food chain is always unidirectional, from the producers to the decomposers.

There is no limit regarding the number of trophic levels of a food chain, since many orders of consumers can exist.

A food chain cannot have consumers of superior orders without having consumers of inferior orders. However, a consumer can participate in several different chains while not always belonging to the same consumer order in each of them.

10. What is the difference between the concepts of food chain and food web?

11. What are the three main types of trophic pyramids studied in ecology?

The three types of trophic pyramids studied in ecology are the numeric pyramid, the biomass pyramid and the energy pyramid.

Generally, the variable dimension of the pyramid is the width, and the height is always the same for each represented strata of living organisms. The width therefore represents the number of individuals, the total mass of these individuals or the available energy in each trophic level.

12. What do numeric pyramids represent?

Numeric pyramids represent the number of individuals on each trophic level of a food chain.

13. In a numeric pyramid, what trophic level is the base? What about the top level?

In a numeric pyramid, the base corresponds to the first trophic level, or rather, to producers. The top level of the pyramid generally corresponds to the last consumer order of the food chain (since the number of individual decomposers, most of which are microorganisms, is too large to be represented).

14. In a numeric pyramid, is it possible for the base to be smaller than the other levels?

15. In the short term, what will happen to the levels above and below a population of secondary consumers of a numeric pyramid if a large number of individuals from this population dies?

16. What do biomass pyramids represent?

Biomass pyramids represent the sum of the masses of the individuals that participate in each trophic level of a food chain.

When biomasses are compared, the concept of dry mass is often used. The dry mass is the total mass less the water mass of an individual. The total mass is also called fresh mass. To use dry mass instead of fresh mass is useful because, among living organisms, there are differences related to the proportion of water within their body and such differences can distort the quantitative analysis of incorporated organic material.

18. What do energy pyramids represent?

Energy pyramids represent the amount of available energy on each trophic level of the food chain.

19. Into which type of energy is the light used in photosynthesis transformed?

The light energy used in photosynthesis is transformed into chemical energy.

An upper trophic level always has less available energy than lower trophic levels. This is because on each trophic level, only a fraction of the organic material of the level below is incorporated into the consumers (into their bodies). The other part is eliminated as waste or is used by the metabolism as energy source. Therefore, it is never possible to have energy pyramids with an inverted shape, that is, with the tip on the bottom and the base on the top. It is also not possible to have upper trophic levels with a variable dimension larger than inferior ones. In every energy pyramid, from the base to the top, the size of the variable dimension decreases.

21. What is the gross primary production of an ecosystem? How does GPP relate to photosynthesis?

The gross primary production of an ecosystem, or GPP, is the quantity of organic material found in a given area at a given period.

Since only autotrophs produce organic material and photosynthesis is the main production process, GPP is a result of photosynthesis.

22. What factors have an effect on gross primary productivity due to their effect on photosynthesis?

Mainly water and light, but also mineral salts, temperature and carbon dioxide are factors that interfere with gross primary productivity.

23. What are the destinations of the organic material made by producers?

Part of the organic material synthesized by producers is consumed as an energy source for the metabolism of producers. The other part is incorporated (into its body) and becomes available to heterotrophic organisms in the ecosystem. On each following trophic level, part of the organic material is used in the metabolism of the individuals on the level, the other part is eliminated as waste and only a fraction is incorporated and becomes available as food for the following level.

24. What is the formula for net primary production (NPP)? How does NPP relate to energy pyramids?

The base of energy pyramids must show NPP and not GPP, since the idea of these pyramids is to show the available energy on each trophic level of the food chain.

Now that you have finished studying Food Chain and Trophic Pyramids, these are your options: