The Parts and Function of the Human Eyes

1. What is vision? Why is vision important for life on earth?

Vision is the ability of some living organisms to perceive, to distinguish and to interpret luminous stimuli.

Vision is important on earth mainly in terrestrial and superficial aquatic habitats, because our planet is intensely exposed to sunlight and therefore light and colors become ways to distinguish objects present in the environment, even at distance. This distinction provided new survival strategies for organisms, new protection mechanisms against external dangers, new ways to find food and to communicate with other individuals, new types of courting and reproduction behaviors, etc. Overall, it created new possibilities of interaction with the surroundings and increased the capacity to explore new ecological niches. 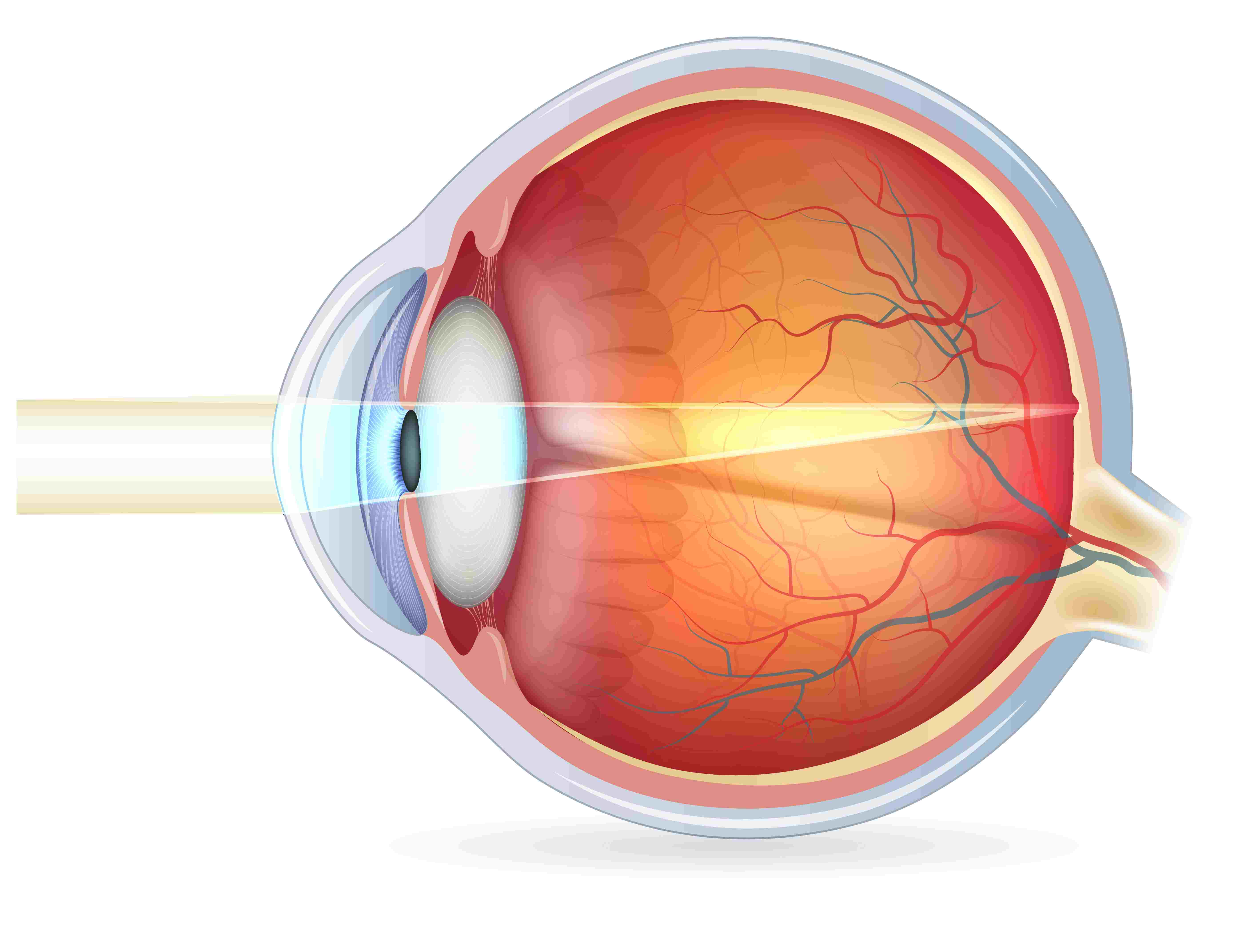 2. How does photosensitivity in cnidarians, annelids and worms differ from that of insects, cephalopods and vertebrates?

Cnidarians, annelids and worms contain photoreceptor cells organized into ocelli or diffusely dispersed in the body. These animals do not perceive images.

Among insects, cephalopods and vertebrates, the photoreceptor cells are part of more sophisticated structures, the eyes, which are able to form images and send them to the nervous system.

The Structure of the Human Eyes

The organs of the human visual apparatus are the eyes, the optic nerves and the visual areas of the brain (located in the occipital lobes of both hemispheres).

4. What are the main structures of the human eye?

5. What is the function of the iris and of the pupil?

6. Photoreceptor cells are cells that sense light. In which part of the human visual system are they located? How do these cells work?

Photoreceptor cells form the retina, a lamina that covers the internal posterior region of the eyeball. The photosensitive cells of the retina are divided into two types: cone cells and rod cells. These cells contain pigments that sense specific light wave ranges (frequencies) and trigger action potentials transmitted by the optic nerves to the visual area of the brain.

7. Since visual images are projected in an inverted manner on the retina why don't we see things upside down?

8. What type of structure is the crystalline lens? What is its function?

The crystalline lens is a converging spherical lens. This natural lens has the function of projecting images of objects onto the retina.

9. What is visual accommodation?

10. What are the near point and far point of vision?

The near point is the closest distance between an object and the eye that allows the formation of a focused image; or rather, it is the point at which the ciliary muscles are at their maximum contraction. The far point is the most distant point from the eye at which an object can be located and seen in a focused manner; that is, it is the situation of maximum relaxation of the ciliary muscles. The zone between the near point and the far point is called the accommodation zone.

11. How can the visual deficiencies known as myopia and hypermetropia be optically explained?

Myopia is the visual condition in which images are formed before (in front of) the retina. Hypermetropia is the visual condition in which the point of image formation is beyond (behind) the retina. In reality, myopia is due to an increase in the distance between the retina and the crystalline lens, mainly caused by a slight flattening of the eyeball. In hypermetropia, the retina is too close to the crystalline lens due to a slight shortening of the eyeball.

In myopia, the near point and the far point of vision are closer (the refractivity of the crystalline lens corresponding to the maximum distension capacity of the ciliary muscles is not enough to provide visual accommodation). In hypermetropia, the ciliary muscles are not able to contract more to compensate for the inadequate position of the retina, meaning that the near point becomes more distant.

12. What are presbyopia and astigmatism?

Presbyopia is the visual impairment in which the strength of the ciliary muscle is lost, thus reducing the capability of the crystalline lens to adjust images of close objects onto the retina. In presbyopia, the near point of vision becomes more distant. This disease generally occurs in the elderly.

Astigmatism is caused by refractive structures of an irregular shape, mainly the cornea. In astigmatism, a single object-point may produce more than one image on the retina and, as a result, the vision becomes distorted.

Now that you have finished studying Human Eyes, these are your options: