A Brief Biography of Mendel

1. Who was Gregor Mendel?

Mendel is considered the father of genetics. He was a monk, biologist and botanist born in Austria in 1822 and who died in 1884. During the years 1853 to 1863, he cultivated pea plants in the gardens of his monastery to be used in his research. His experiments consisted of crossing pea plants with distinct characteristics (size, seed color, etc.), cataloging the results and interpreting them. The experiments led him to develop his laws, results published in 1886 with no scientific repercussions at that time. Only at the beginning of the 20th century, in 1902, 18 years after his death, were his achievements broadly recognized. 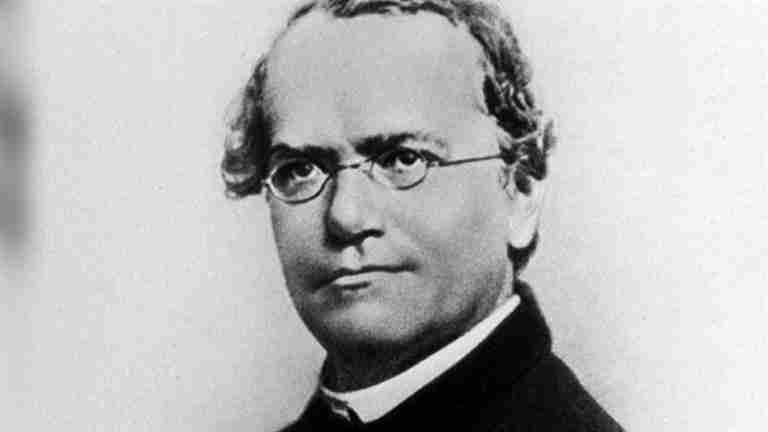 2. What is hybridization in genetics?

Monohybridism is the study of only one characteristic in the cross-breeding of two pure individuals (hybridization) for that characteristic.

4. Considering hybridization in a trait such as the color of the flowers of a given plant species (red dominant/ yellow recessive) conditioned by a pair of different alleles, what are the phenotypical results of the first generation (F1) and the phenotypical results of the second generation (F2, formed by crossing between F1 genotypes)? What are the proportions of phenotypes in F1 and F2?

5. Considering hybridization in a trait such as the color of the flowers of a given plant species (red/yellow) conditioned by a pair of different alleles in relation to complete dominance (red dominant/yellow recessive), why is one of the colors missing in the F1 generation?

6. Considering hybridization in a given trait such as the hair color of a mammalian species (white/black) conditioned by a pair of different alleles under complete dominance (black dominant, B/ white recessive, w), how can the phenotypical proportion obtained in the F2 generation be explained? What is this proportion?

7. What is meant by saying that the gametes are always “pure” when referring to a given trait conditioned by a gene with two different alleles?

To say that gametes are pure means that they always carry only one allele of the specified trait. Gametes are always “pure” because, in them, the chromosomes are not homologous; they contain only one chromosome of each type.

8. What is Mendel’s First Law?

Mendel’s First Law postulates that a characteristic (trait) of an individual is always determined by two factors, one inherited from the father and the other from the mother, and that the direct offspring of the individual receives only one of these factors (random) from it. In other words, each trait is determined by two factors that separate during gamete formation.

Mendel’s First Law is also known as the law of purity of gametes. Mendel deduced the way genes and alleles were transmitted and how traits were conditioned without even knowing of the existence of these elements.

If an individual is dominant homozygous, for example, AA, it will produce only gametes with the allele A. The proportion is therefore 100% AA gametes.

If an individual is recessive homozygous, for example, aa, it will produce only gametes with the allele a, also a 100% proportion.

10. Which type of gamete is produced by a heterozygous individual? What is the genotypic proportion of these gametes?

11. In the F2 generation of a hybridization for a given trait conditioned by a pair of alleles T and t, according to Mendel’s First Law, what are the genotypes of each phenotypic form? How many genotypic and phenotypic forms are there, respectively?

13. What is a genetic family tree?

Genetic family trees are useful because it is practically impossible and ethically unacceptable to cross-breed human beings for genetic testing. With the help of family trees, the study is carried out through the analysis of marriages (and cross-breeding) that have already occurred in the past. From the analysis of family trees, for example, information on the probability of the emergence of a certain phenotype or genotype (including genetic diseases) in the offspring of a couple can be obtained.

14. What are the main conventional symbols and signs used in genetic family trees?

In genetic family trees, males are usually represented by a square and females by a circle. Crossings are indicated by horizontal lines that connect squares to circles and their direct offspring are listed below and connected to that line. The presence of the studied phenotypical form is indicated by a complete hachure (shading) of the circle or the square corresponding to the affected individual. It is useful to number the individuals from left to right and from top to bottom for easy reference.

15. What are the three main steps to properly study a genetic family tree?

Mendel’s Second Law postulates that two or more different traits are also conditioned by two or more pairs of different factors, and that each inherited pair separates independently from the others. In other words, gametes are always formed with a random representative of each pair of the factors that determine phenotypical characteristics.

Mendel’s Second Law is also known as the law of independent assortment.

17. What is the condition for Mendel’s Second Law to be valid?

18. According to Mendel’s Second Law, in the cross-breeding of homozygous individuals concerning two pairs of unlinked alleles, AABB x aaBB, what are the genotypic and phenotypic proportions in F1 and F2?

As F1 consists of AaBb individuals, the gametes from their crossing can be: AB, Ab, aB and ab. The casual combination of these gametes forms the following genotypical forms: one AABB, two AABb, two AaBb, four AaBB, one Aabb, one Aabb, one aaBB, two aaBb and two aabb. The phenotypical proportion would then be: nine A_B_ (double dominant); three A_bb (dominant for the first pair, recessive for the second); three aaB_ (recessive for the first pair, dominant for the second); and one aabb (double recessive).

19. Considering the independent assortment of all factors, how many types of gametes does a VvXXWwYyzz individual produce? What is the formula to determinate that number?

That individual will produce eight different types of gametes (take not, gametes, not zygotes).

To determine the number of different gametes produced by a given multiple genotype, the number of heterozygous pairs is counted (in the case mentioned, three) and the result is calculated as an exponent of two (in the example, 2 x 2 x 2 = 8).

20. How is it possible to obtain the probability of the emergence of a given genotype formed of more than one pair of different alleles with independent assortment based on knowledge of the parental genotypes?

Taking as an example the crossing of AaBbCc with aaBBCc, for each allele pair considered, it is possible to verify which genotypes it can form (like in an independent analysis) and in which proportion. AA x aa: Aa, aa (1:1). Bb x BB: BB, Bb (1:1). Cc x Cc: CC, Cc, cc (1:2:1). The genotype for which the probability is to be determined is for example aaBbcc. For each pair of this genotype, the formation probability is determined: for aa, 0.5; for Bb, 0.5; for cc, 0.25. The final result is obtained by the multiplication of these partial probabilities, 0.5 x 0.5 x, 0.5, resulting in 0.0625.

Now that you have finished studying Mendel's Laws, these are your options: