Nematodes are Beautiful to Study and Learn

1. What are examples of nematodes?

Ascaris, hookworms and filaria, all of which are human parasites, are examples of nematodes (also known as roundworms). 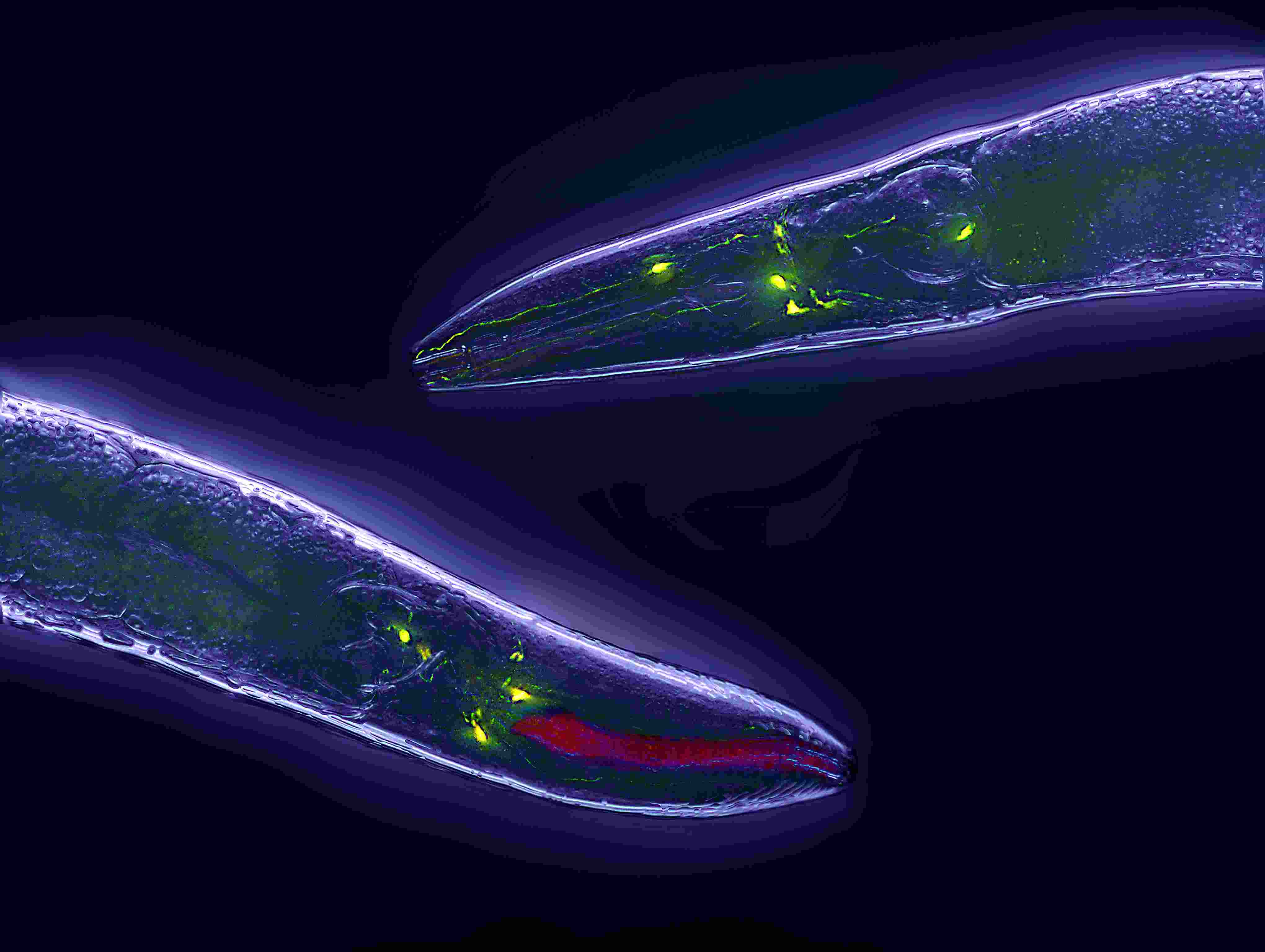 Some roundworms are parasitic to humans and to plants, whereas others are free-living.

3. What typical morphological feature of nematodes differentiates them from platyhelminthes?

Nematodes are also known as roundworms. As the name indicates, they are not flat like platyhelminthes. From an evolutionary point of view, the first complete digestive system, which contains a mouth and anus, appears in nematodes. Another evolutionary novelty brought by nematodes is their pseudocoelom.

4. What are the morphological similarities and differences between nematodes and annelids?

Nematodes, like annelids, have an elongated cylindrical body. Annelids are different from nematodes in that they have a segmented body (a body divided into metameres). Because of this, they are called segmented worms.

Just like platyhelminthes, nematodes are triploblastic organisms, meaning that they have three germ layers (the ectoderm, mesoderm and endoderm).

The main evolutionary innovation of nematodes is their complete digestive system, which contains two openings (a mouth and anus).

Since the ingestion and the defecation processes can occur at different extremities of the digestive tube, organisms with a complete digestive system have the advantage of being able to ingest new food while the residue of already eaten food is still inside the body and has not yet been eliminated.

7. Compared to platyhelminthes, which physiological problem was caused the cylindrical body of nematodes? How was that problem solved?

The cylindrical shape of nematodes made it impossible for them to use respiration exclusively via simple diffusion between cells, since they contain tissues far from their exterior. This problem was solved by the presence of an inner cavity in the body filled with fluid, called the pseudocoelom. The pseudocoelom has the function of distributing gases and nutrients to the body as well as collecting waste. In addition, it serves as a hydrostatic base to maintain the shape of the worm.

(Due to the fact that the pseudocoelom fluid and the pseudocoelom do not constitute a true circulatory system with blood and a heart, the respiration in nematodes is not considered to be cutaneous; rather, scientists consider that these animals still carry out respiration via diffusion).

8. How does the excretory system of nematodes work?

The metabolic waste of nematodes is collected by two longitudinal lateral excretory channels that open at one single excretory pore near the mouth.

9. How is the nervous system of nematodes organized? Where in their body are their neural cords located?

Roundworms have a ganglial nervous system with an anterior neural ring, which represents (evolutionarily) primitive cephalization.

Nematodes have two main longitudinal ganglial cords, one of which extends dorsally and the other of which ventrally under the epidermis. There may also be nerves that run laterally to these main cords. The nervous system of a free-living nematode, Caenorhabditis elegans, has been well-studied in neurophysiological research and contains 302 neurons.

The nematode C. Elegans was the organism used in the research on the genetic regulation of organogenesis and apoptosis, the researchers of which won the Nobel Prize in Medicine in 2002 (Brenner, Horvitz and Sulston).

10. What type of reproduction occurs in roundworms? What is the typical feature of nematode sperm cells?

Nematodes reproduce sexually. Nematode sperm cells do not have cilia or flagella, and they move through amoeboid movement, forming pseudopods.

11. What are the main human diseases caused by roundworms?

The main human diseases caused by nematodes are ascariasis, ancylostomiasis (hookworm infection) and filariasis (commonly known by its sign, elephantiasis).

12. The main features of nematodes.  How can nematodes be described according to examples of representative species, basic morphology, type of symmetry, germ layers and coelom, digestive system, respiratory system, circulatory system, excretory system, nervous system and types of reproduction?

Now that you have finished studying Roundworms, these are your options: