1. What groups of living organisms form the protist kingdom?

The protist kingdom includes protozoa and algae. (Two groups of fungi with similar characteristics to protozoa, myxomycetes and oomycetes, have been classified as protists.)

Unicellular protozoa and algae are unicellular eukaryotes. Pluricellular algae are also eukaryotes of simple structure. Protists are believed to be the phylogenetic ancestors of the living organisms of the other eukaryotic kingdoms (fungi, animals and plants). 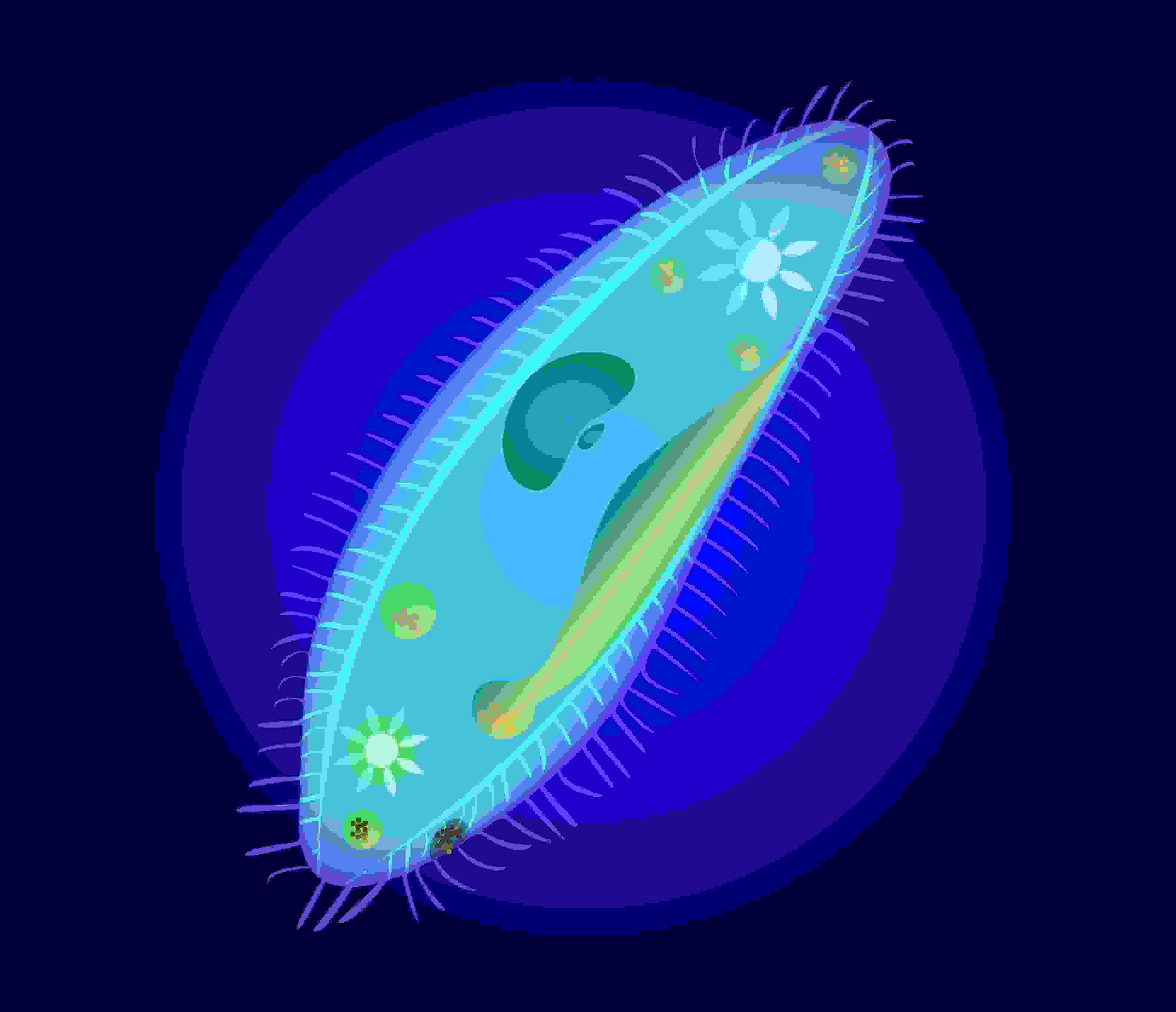 2. What is the fundamental difference between protozoa and algae?

The basic difference between protozoa and algae is the fact that protozoa are heterotrophs whereas algae are photosynthetic autotrophs.

3. What characteristics of protozoa make them resemble animals?

Protozoa are unicellular organisms that present some characteristics in common with animal cells.

In comparison to pluricellular organisms, protozoa are closer to the animal kingdom than to plants, as they are heterotrophs, they have a rudimentary locomotion system (amoeboid movements, cilia, flagella), they do not have cell wall, and some species present structures that resemble the structures of a primitive digestive system, with a cytostome (mouth) and cytopyge (anus) specialized in digestion and excretion.

There is strong support for the hypothesis that animal cells evolved from protozoa.

4. What is the basic morphology of the cells of protozoa?

Protozoa are eukaryotic cells and, as a result, have organelles and structures common to this kind of cell: endoplasmic reticula, a Golgi apparatus, digestive vesicles, ribosomes, mitochondria, a nucleus with genetic material, karyotheca, etc. All these elements are found dispersed throughout the cytoplasm. Protozoa do not have cell walls.

Protozoa from the mastigophora group (such as trichomonas) have flagella and others from the ciliated group (like paramecium) have cilia.

5. Do protozoa have a nucleus?

All protozoa, because they are eukaryotes, have a nucleus. Some species, such as paramecium, have two nuclei: the macronucleus and micronucleus.

6. What are the respective functions of the macronucleus and of the micronucleus in  paramecium?

The macronucleus is the cell nucleus in the normal sense, it contains DNA and RNA and acts as the center of cellular control and regulation. The micronucleus has reproductive functions and is related to the conjugation process (sexual reproduction).

7. What do protozoa “eat”? Do they move in search for food?

Protozoa are heterotrophic organisms, meaning that they do not make their own food and therefore they need to search for it in the environment. Protozoa have developed several locomotion mechanisms and actively move towards food.

8. How do amoebae, paramecia and trichomonas move?

Amoebae move through amoeboid movements, which are small projections and invaginations of their plasma membrane (pseudopods) that alter the external shape of the cell, making it move along surfaces. The outer face of the plasma membrane of paramecia is covered by cilia that flap around, helping the cell to move. Trichomonas are flagellated protozoa, meaning that they have relatively long filaments outside the cell that vibrate and make it possible for them to swim in fluid environments.

9. How do protozoa digest?

Digestion in protozoa is intracellular digestion: organic material is internalized and broken down inside the cell.

Protozoa obtain food via phagocytosis. This food is digested when phagosomes fuse with lysosomes within the cell, forming digestive vacuoles. The digestive vacuoles produce residual bodies that are eliminated from the cell by exocytosis.

In paramecium, the entrance of food into the cell and the excretion of digestive waste products occur in specialized regions of the plasma membrane, called the cytostome and the cytopyge.

Fresh water has a lower concentration of solutes than sea water and it (fresh water) tends to be less concentrated than the intracellular environment, causing cells to swell. Sea water, on the other hand, since it is very concentrated, tends to dehydrate the cell.

The vacuoles of protozoans are internal structures specialized in water storage that release water into the cytoplasm when necessary. Therefore, vacuoles can dilute the cytoplasm to put it into osmotic equilibrium with the environment. As a result, fresh water protozoa need vacuoles more, since their intracellular environment is hypertonic in relation to the exterior. Without the dilution mechanism provided by the vacuoles, fresh water protozoa would absorb too much water and would die.

11. Do protozoa use sexual or asexual reproduction?

In protozoa, reproduction can be either sexual or asexual. The most frequent form of sexual reproduction is binary division, or scissiparity, in which the cell divides via mitosis, producing two daughter cells. Some species, such as plasmodium, the agent of malaria, reproduce asexually via schizogony (multiple fission); in this form of reproduction, the cell becomes multinucleate, generally inside a host cell, and each nucleus is expelled together with a portion of the cytoplasm, producing new protozoans.

Sexual reproduction in protozoa can happen via conjugation, with the incorporation of genetic material from one cell into another, or through gametes that fertilize others and form zygotes. In plasmodium, sexual reproduction happens in the mosquito, the definitive host, where the zygote undergoes mitosis (sporogony), creating many sporozoites.

The hypothesis that protozoa are the origin of multicellular animals is further strengthened by the fact that these protozoa were able to reproduce sexually, since only genetic variation can produce biological differentiation to the point of creating new types of living organisms.

13. What are the four groups of protozoa?

The four main groups of protozoa are sarcodines (those that form pseudopods, such as amoebae), mastigophores (flagellated, like trypanosome which causes Chagas’ disease), ciliated (like paramecia) and sporozoans (spore-forming, like plasmodia).

14. What is the controversy over the taxonomic classification of euglena?

There is a controversy surrounding euglena because they tend to be classified sometimes as protozoa and sometimes as algae. Although they have chloroplasts and are photosynthetic autotrophic organisms, euglena do not have a cell wall and can survive by “eating” substances from the environment when light is not available for photosynthesis. Curiously, euglena also have a photosensitive structure called the stigma, which orients the movement of the cell towards light. Nowadays, euglena are classified as algae, but it is suspected that they are a common ancestor of algae and protozoans.

15. Do algae reproduce sexually or asexually?

Some algae reproduce sexually and others reproduce asexually.

In unicellular algae, reproduction is generally asexual and is carried out via binary division.

In pluricellular algae, asexual reproduction can occur via fragmentation or sporulation.

In the sexual reproduction of algae, uni or pluricellular, the fusion of gametes (syngamy) occurs. In some algae, all cells can become gametes and in others only some cells can be used in that way. Some species may present the alternation of generations, forming gametophytes and sporophytes with different ploidies.

16. What is the commercial importance of algae?

Many types of algae have high nutritional values and are commercialized and consumed as human food. They are a very popular food in Asia. Jelly compounds are extracted from some algae, such as glues and pastes for industrial and commercial use.

Agar-agar, used as a medium for biological culture in laboratories, and the substance carrageenin, an ingrediente in tooth paste, cosmetics, paint and hygiene products, are extracted from rhodophyte algae. Diatom algae on the bottom of the ocean form diatomites, used in the production of filters, refractories, thermal insulation and cement. Some algae are used as agricultural fertilizers.

17. What is the phenomenon known as the “red tide”? What environmental damage can it cause?

The red tide is a phenomenon that occurs when dinoflagellates (algae from the pyrrophyte group) reproduce excessively in the ocean. These algae release toxins that affect the nervous system and can cause death in the marine animals that ingest them and in humans that eat contaminated animals.

Now that you have finished studying Protists, these are your options: