1. What are worm infections? 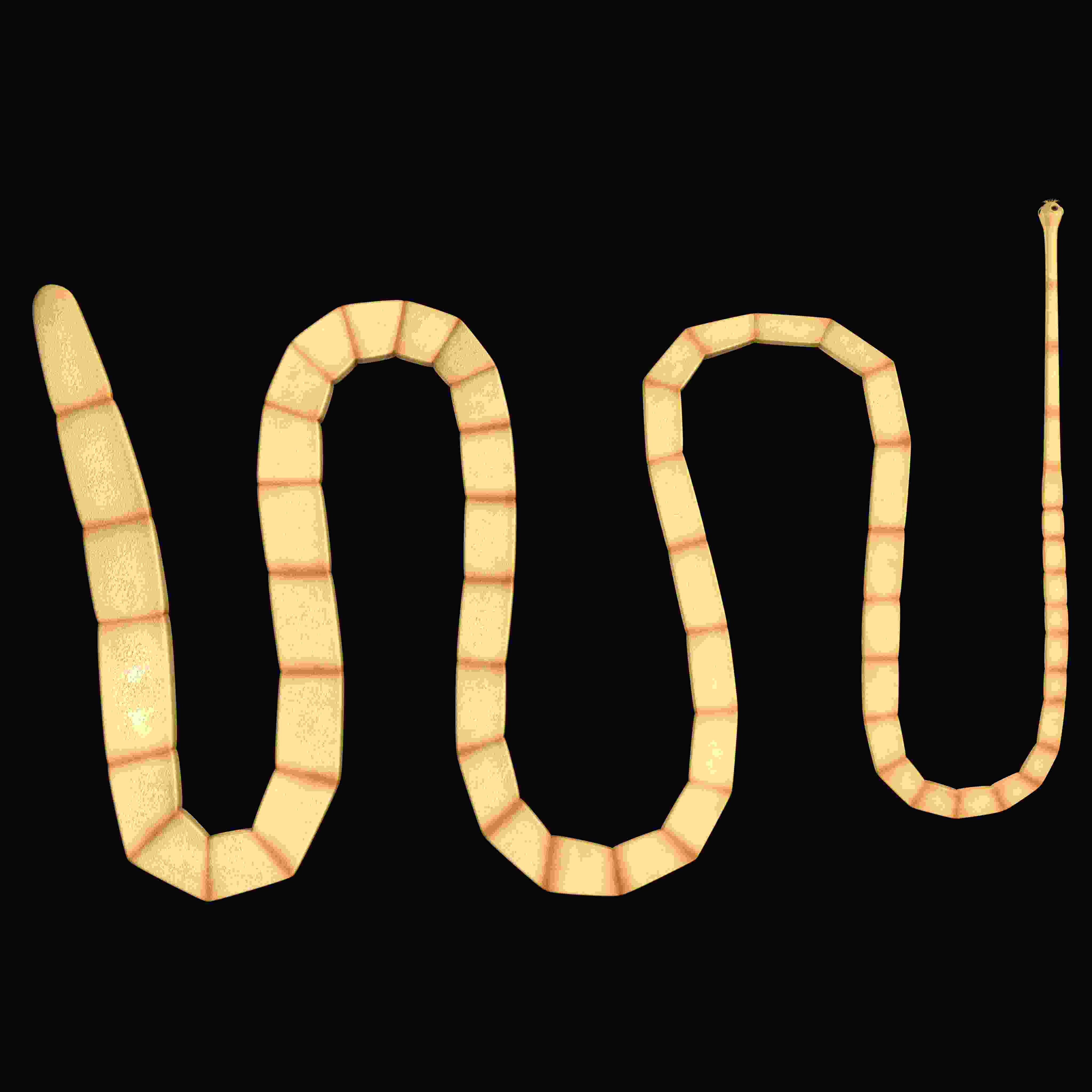 2. What are the most important worm infections?

Other important worm infections caused by platyhelminthes are: fascioliasis, caused by Fasciola hepatica, which attacks the liver and the bile ducts; and hydatid disease, which is also known as echinococcosis, and is caused by a taenia-like parasite and transmitted by the feces of dogs in contact with sheep, with a clinical manifestation similar to cysticercosis. Other important infections caused by roundworms are: strongyloidiasis, from the agent Strongyloides stercoralis, a common opportunistic disease in AIDS; filariasis, also known as elephantiasis, transmitted by mosquitoes of the Culex genus, caused by Wuchereria bancrofti and other thread-like worms, and which is manifest by the obstruction and fibrosis of lymphatic vessels causing the swelling (lymphedema) of limbs; enterobiasis (pinworm infection), caused by Enterobius vermicularis, a worm that lives as a parasites in the colon and the human perianal region; and cutaneous larva migrans, an ancylostomiasis of the skin caused by Ancylostoma braziliensis.

4. How can schistosomes be classified regarding sex separation?

Schistosomes are dioecious, meaning that the species has separate sexes and male and female individuals.

5. What is the intermediate host of Schistosoma mansoni? Where does that host live?

The intermediate host of the schistosome is a gastropod mollusc, a snail of the Planorbidae family and Biomphalaria genus. The snail vector of schistosomiasis lives in fresh water, such as in lagoons and creeks.

6. What is the life cycle of the schistosome?

Male and female adult schistosomes live within blood vessels of the human intestines. The females release eggs that cross the vessel walls and enter the intestinal lumen to be eliminated with human feces. When in water, the egg releases a larva called a miracidium that then swims to reach the snail that is the intermediate host. Within the snail, miracidia transform into cercariae, another kind of schistosome larva. The cercariae leave the snail and swim until penetrating through human skin. In humans, the cercaria enters circulation, infecting mainly the blood vessels of the intestines, liver or lungs and developing into the adult form of the parasite.

7. What are the main phases and clinical manifestations of schistosomiasis?

Schistosomiasis has acute and chronic phases. Days after the infection, cercarial dermatitis appears at the site where the worm penetrated the skin. In one or two months, the acute phase begins and fever, coughing, muscle pain and nausea occur but soon disappear; in some people this phase may not appear. In the chronic phase of the disease, the worm infestation can affect the bowels, causing diarrhea, bloody feces, tiredness and hepatosplenomegaly (enlargement of the liver and spleen). The excessive pressure on the hepatic portal vein produces a varix (collateral circulation) in the esophagus and the patient may have hemorrhages and bloody vomiting that may even cause death.

8. What are the main prophylactic measures against schistosomiasis?

The main measures to prevent schistosomiasis are: information for infected individuals to look for treatment and to not spread the disease; the chemical and biological eradication of the vector snail; basic sanitary conditions to avoid the contamination of lakes, rivers and other water sources by infected feces; and avoiding contact with fresh water suspected of contamination.

9. What are taenias? What diseases are caused by them?

Taenias, also known as tapeworms, are species of platyhelminth animals (flatworms). The main diseases caused by taenia are taeniasis and cysticercosis.

10. How do taenias classify according to the division of sexes?

Taenias are monoecious (hermaphrodite); the same individual has female and male reproductive organs and undergoes self-fertilization.

11. What are the two main species of taenia that cause human diseases?

The two mains species of taenia that cause disease in humans are Taenia solium, or the pork tapeworm, and Taenia saginata, or the beef tapeworm.

In addition to these species are the fish tapeworm, or Diphyllobothrium latum, and a tapeworm called Echinococcus granulosus, which lives in dogs and causes the severe disease known as hydatid disease or echinococcosis, in humans.

12. How do tapeworms obtain food and carry out gas exchange?

Tapeworms have hooks and sucking structures on their heads (scolex) that attach the parasite to the gut wall; these structures often do not injure the host tissue. The parasite obtains food and carries out gas exchange through absorption and diffusion across its skin. Because it is a platyhelminth, it does not have a digestive system or a circulatory system.

13. What are the segments that form the body of the tapeworm called? What is their function?

The body of a tapeworm is made of segments called proglottids. Proglottids are the reproductive structures of taenia and contain the organs that produce male and female gametes. As the proglottids become distant from the scolex (head), they mature. Mature proglottids can fertilize themselves or neighboring ones and the eggs formed are stored inside them. Proglottids called pregnant proglottids, full of eggs, detach from the body of the worm and are eliminated with human feces.

14. Concerning their respective intermediate hosts, how different are Taenia solium and Taenia saginata?

15. What is the life cycle of a tapeworm?

Pregnant proglottids with taenia eggs are released together with human feces. If ingested by the intermediate hosts, pigs or cows, the eggs break inside their intestines and the larva cross the mucosa and enter circulation, reaching the muscles, heart, brain and other organs of these animals and then differentiating into cystic larvae called cysticerci. Humans become infected when eating raw or undercooked pork or beef contaminated by cysticerci. In human intestines, cysticerci develop into adult worms and the cycle continues.

16. What is the difference between taeniasis and cysticercosis?

Taeniasis is the parasitic disease caused by the adult tapeworm within the human intestine.

Cysticercosis occurs when humans ingest the eggs or pregnant proglottids of taenias, for example, through poorly washed food or self-infection. In cysticercosis, humans assume the role of the intermediate hosts of the parasite and the cysticerci develop within human organs such as muscles, the brain, the eyes and subcutaneous tissue. The infestation of the brain by cysticerci, a condition known as neurocysticercosis, is extremely severe and may lead to death.

In the normal life cycle of taenia, humans are the definitive hosts and develop taeniasis, a less serious disease, and not cysticercosis.

17. If a person eats raw or undercooked meat infected by Taenia solium or Taenia saginata will this person develop taeniasis or cysticercosis?

If a person eats raw or undercooked meat infected by Taenia solium or Taenia saginata, he or she will develop the disease taeniasis. The ingestion of contaminated raw or undercooked meat means that cysticerci are being ingested. The human will then be affected by taeniasis, since in his or her gut the cysticerci may develop into an adult tapeworm.

18. How does self-infection by tapeworms occur?

Taeniasis patients may develop the most severe form of the worm infection, cysticercosis, because their feces contain taenia eggs and pregnant proglottids, carrying the risk of self infection due to bad hygienic habits, such as not washing the hands after defecation. If these individuals ingest the eggs of the parasite, they can also develop cysticercosis.

19. What are some prophylactic measures for tapeworm infections?

The main prophylactic measures against taeniasis and cysticercosis are: not to ingest raw or undercooked pork or beef; sanitary education of the people; appropriate treatment of sewage; and adequate treatment of infected people.

20. What is ascaris? What is the disease caused by this worm?

Ascaris, or Ascaris lumbricoides, is an animal of the nematode phylum; or rather, a roundworm. Ascaris causes ascariasis, a common worm infection of the intestine.

21. How do ascaris obtain food?

Ascaris live within the human gut and feed on the food ingested by the infected person.

22. Does Ascaris lumbricoides have an intermediate host?

Ascaris is a monoxenous parasite; its life cycle is dependent on only one host and, therefore, it does not have intermediate host.

23. What is the life cycle of ascaris?

Adult ascaris that live within the human intestine can release up to 200,000 eggs per day. The eggs are eliminated with human feces and mature in the environment under certain heat and moisture conditions. Humans may ingest mature eggs through food contaminated by human feces or through bad hygienic habits. Once inside the human intestine, the eggs release larvae that cross the enteric mucosa and enter circulation, reaching the lungs. In the lungs, the larvae mature and go to the airway and the pharynx, where they are then swallowed. Within the gut ,the larvae develop into adult worms.

24. What are the main symptoms of the pulmonary and intestinal phases of ascaris infestation?

In the pulmonary phase, ascaris infestation causes coughing, hemoptysis, dyspnea, fever, fatigue and may cause a special kind of pneumonia called eosinophilic pneumonia. During the intestinal phase, the symptoms are due to robbing of nutrients from the host and therefore hunger and weight loss may appear. Masses of ascaris inside the bowels can cause severe intestinal obstructions.

25. What are some prophylactic measures against ascariasis?

The main prophylactic measures against ascariasis are: the effective washing of vegetables and other foods; basic sanitary conditions and the appropriate treatment of sewage; hygiene education for people; and measures against insects that can carry the eggs of the parasite, such as flies and cockroaches.

Since the parasites feed on human blood, the infection causes anemia, hypoproteinemia and the patient often seems pale.

27. Which typical feature of hookworms is related to the way they obtain food and explore the host?

Both Ancylostoma duodenale and Necator americanus have mouthparts with hooks or “teeth” that help to attach the parasite to the human intestine wall and facilitate the tissue injury necessary to drain blood from the host. The structures are evolutionary adaptations to the parasitic way of life of these animals.

Hookworms are monoxenous, as their life cycle depends on only one host.

29. What is the life cycle of hookworms?

Adult hookworms within the human intestine release eggs that are eliminated with human feces. Under adequate moisture and temperature conditions, the eggs mature in the soil and generate larvae. The larvae differentiate into thread-like infectious larvae that can penetrate human skin, generally through the feet. The larvae enter human circulation and reach the lungs, from which they spread to the airway and the pharynx. When the larvae are swallowed, they enter the small intestine and develop into adult worms and the cycle restarts.

30. What are the main prophylactic measures against hookworm disease?

The main prophylactic measures against hookworm disease are: to avoid walking barefoot on soil suspected of contamination; basic sanitary conditions and the appropriate treatment of sewage; and treatment of infected people.

Now that you have finished studying Worm Diseases, these are your options: