Viral Diseases and Modes of Transmission

1. What are some human diseases caused by viruses and what are their respective modes of transmission? 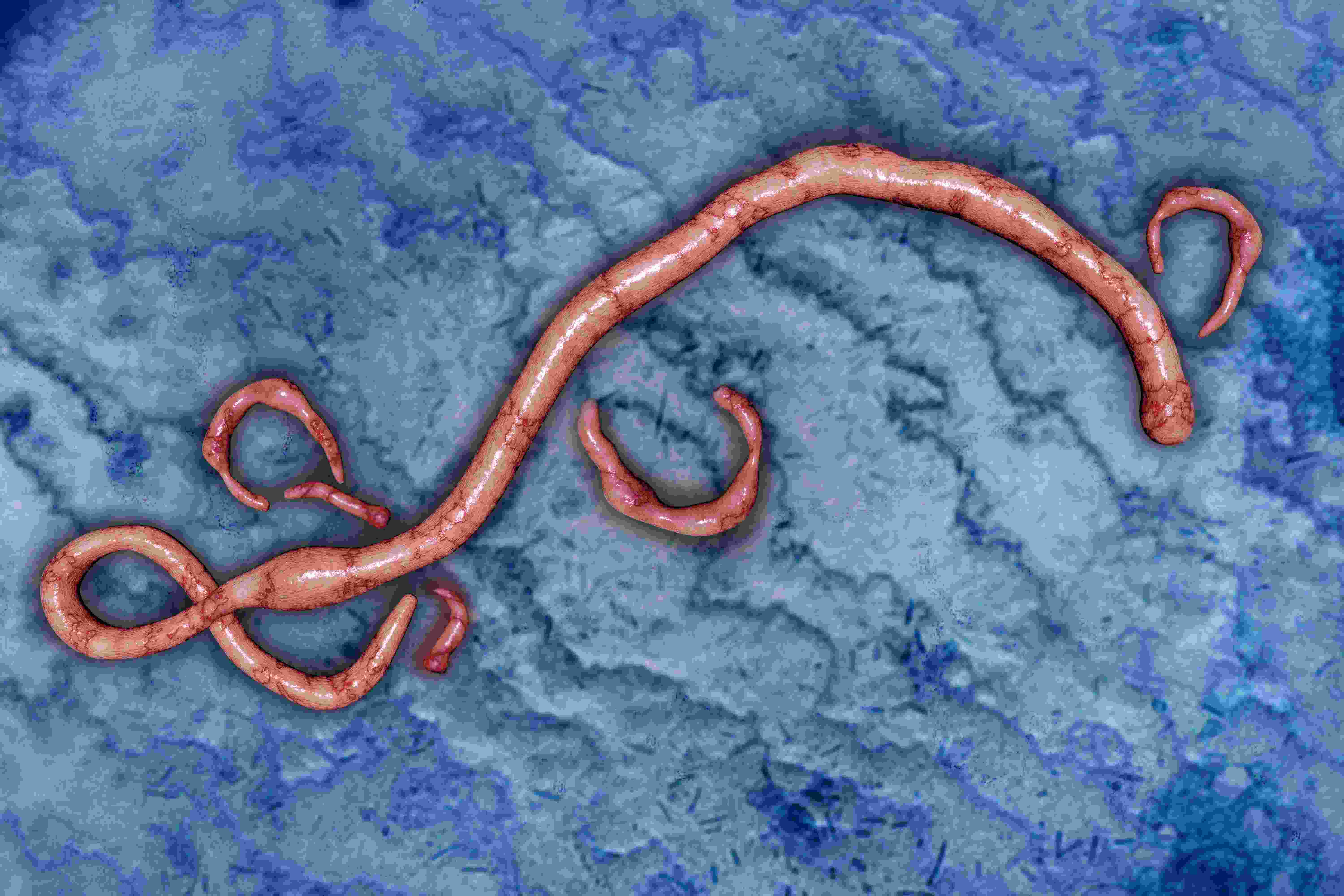 2. What virus causes the flu? Why doesn't the body produce permanent immunity against that virus? How does the vaccine against the flu work?

The flu is a disease caused by the influenza virus, a highly mutant DNA virus. Due to the high mutation rate of the virus, which forms many different strains, the flu always presents epidemic features in affected populations and people may have several flu episodes during their life (the immune response producing during previous infections is not effective in future infections).

The vaccine against the flu is a vaccine made of the attenuated virus of three different strains. Each year, the WHO (World Health Organization) researches and determines which strains should compose the vaccine. This is a strategy to combat the high mutation rate of the virus.

3. Why is rubella during pregnancy a threat to the fetus?

If it occurs during pregnancy, rubella is a dangerous disease because the virus crosses the placenta and contaminates the fetus. The fetus then develops congenital rubella, a teratogenic (cause of malformations) disease.

Congenital rubella may be prevented by vaccination. A doctor must always be consulted before vaccination.

4. What are the main available vaccines against poliomyelitis?

5. Is rabies caused by viruses or by bacteria? How is it transmitted? Which organs and tissues are affected by the disease? How is it prevented and treated?

Rabies, also known as hydrophobia, is a viral disease. It is found among dogs, cats, bats and other wild mammals. The transmission to humans occurs through the saliva of contaminated animals, mainly through bites.

The rabies virus is neurotropic and attacks the central nervous system in a fast and lethal fashion. The prevention of the disease is done through the prophylactic vaccination of animals and humans. The treatment is done with an anti-rabies serum containing specific antibodies against the virus.

6. What is the difference between smallpox (variola) and measles?

Smallpox is a viral infection like measles. Smallpox is transmitted by respiratory secretions, saliva and objects in contact with contaminated patients. The disease is characterized by the appearance of numerous vesicles on the skin of the face, trunk and limbs, which can suppurate and form crusts; smallpox complications can lead to death. Measles is also transmitted by saliva and respiratory secretions. It is characterized by exanthems (red spots on the skin), fever, malaise and lymphadenomegaly (enlarged lymph nodes). If not treated, measles complications can cause death.

Smallpox killed thousands of people around the world at the end of the 19th century and the beginning of the 20th century, but today it has almost been eradicated by vaccination. Nowadays, people fear the possibility of the use of the smallpox virus in biological weapons and by bioterrorists. Measles is not eradicated and affects millions of people each year. Both diseases can be prevented by vaccination.

7. What are the three main types of viral hepatitis?

There are many types of viral hepatitis. The most important ones, epidemiologically, are hepatitis A, hepatitis B and hepatitis C.

8. What are the modes of transmission, main signs and symptoms and treatments for hepatitis A?

Hepatitis A is an acute disease with a low mortality rate caused by the hepatitis A virus (an RNA virus). It is transmitted by the fecal-oral route, often through the contamination of foods such as vegetables and seafood. The virus attacks the liver and its incubation period varies between 15 and 45 days. After incubation the symptoms are fever, headache, abdominal pain, discomfort, nausea and vomiting and the main signs are jaundice, hepatomegaly (enlargement of the liver) and darkened urine (due to excessive bile in blood). Blood tests show increased levels of hepatic enzymes caused by injuries to liver cells. Hepatitis A often heals naturally after 4 to 6 weeks.

9. What are the modes of transmission, main signs and symptoms and treatments of hepatitis B?

Hepatitis B is a disease caused by a DNA virus. The transmission is by blood (wounds, sexual relations, transfusions, accidents with contaminated material, etc.). The most common form of the disease is chronic, in which the infected patient carries the virus for life and the liver gradually suffers injuries that can lead to cirrhosis or even to liver cancer. Another form of the disease is acute, sometimes fulminant, with symptoms similar to those of hepatitis A but more severe and sometimes lethal. There are people who are asymptomatic carriers of the virus. The level of injury to the liver is assessed by blood tests of hepatic enzymes and by liver biopsy (extraction of small samples of tissue to be examined under a microscope). Viral replication can be estimated through PCR (polymerase chain reaction).

10. What are the modes of transmission, main signs and symptoms and treatments of hepatitis C?

Hepatitis C is caused by an RNA virus and is transmitted through blood (like hepatitis B, through wounds, sexual relations, transfusions, accidents with contaminated material, etc.). The usual manifestation is chronic and many people that have the virus are asymptomatic. The liver gradually becomes injured and some patients develop cirrhosis, liver cancer and death. The assessment of the disease is made periodically by hepatic biopsy and by blood tests of hepatic enzymes. Viral replication can be estimated through PCR (polymerase chain reaction).

11. Are there non-viral hepatitis?

12. What are the main human viral diseases transmitted by mosquitoes?

Dengue, or dengue fever, is an epidemic disease in some countries (for example, in Brazil), and its most dangerous form is hemorrhagic dengue. It is caused by four different but related viruses, the reason that it is difficult for an already infected person to become immunized against the disease. Dengue is prevalent in tropical and subtropical regions of Asia, Africa and South America and is transmitted by the bite of the Aedes aegypti mosquito, a daytime mosquito. The viral infection causes varied symptoms similar to flu, such as fever, discomfort and myalgia (muscle pain). In hemorrhagic dengue, a high fever, with or without convulsions, and hemorrhages may occur, leading to circulatory failure and death. There is no vaccine against dengue since there are four agent viruses and there is evidence to suggest that the severity of the disease is greater when the patient is already protected against one type of the virus and is infected by another. The best prophylactic method is to eliminate the vector mosquito.

Yellow fever is a viral infection that occurs mainly in Central Africa and in the Amazon region of South America. It is prevented through vaccination and is transmitted by many species of mosquitoes of the Aedes genus, including Aedes aegypti e Haemagogus. The infection causes clinical manifestations that range from asymptomatic cases to lethal fulminant cases. Generally, the disease begins a with fever, chills, discomfort, headache and nausea and evolves to jaundice (increase of bilirubin in blood, after which the disease is named), mucosal and internal hemorrhages, hemorrhagic vomiting and kidney failure.

Prevention is done by regular mass vaccination and the vaccination of travelers to endemic areas. The fight against the vector mosquito is also an important prophylactic measure.

15. Why is it difficult to produce efficient vaccines against viral infections like dengue and AIDS?

It is difficult to make vaccines against dengue because there are four different types of viruses that cause the disease (DEN1, DEN2, DEN3 and DEN4) and there is evidence to suggest that the protection against one of them aggravates the clinical manifestation when the person is later infected by another dengue virus.

In the case of HIV, the production of a vaccine is difficult because the virus is highly mutant and evades the effect of antibodies.

16. Is a viral infection treated with the same kind of drug that treats bacterial infections?

Antibacterial drugs, potent against a large variety of bacteria, are not effective against viruses, which are intracellular parasites. A viral infection is difficult to treat since antiviral drugs are too specific and have a limited effectiveness. In general, antiviral drugs reduce the viral load (number of viruses), relieving symptoms.

Antivirals (and antiretrovirals, drugs that act against RNA viruses) often inhibit the action of specific enzymes that participate in the virus life cycle.

Now that you have finished studying Viral Diseases, these are your options: